Exposed & Interlaced – Exploring Motion in Analog and Digital is a sequence of imaging chronicling a dance performance into 10 different fragments. The viewer is able to view each fragment as a long exposure film print, as a representation of analog means, and an interactive lenticular that allows the viewer to see a short video clip by changing their perspective, as a representation of digital means. The fragments are displayed sequentially to communicate the entire dance performance.

This idea was formed with my own experiences here at NYU Shanghai and also when I studied abroad. I took the Intro to Film Photography class in NYU Prague with the great artist/Professor Bara Mrazkova. I loved every second of the class and also the time I got to spend in the darkroom, the unexpected surprises along with the special personality of the film, and the delicate nuance. I also took a class with Professor Moon last semester at NYU Shanghai called Kinetic Interfaces, where I had the chance to experiment with Microsoft Kinect, a motion sensing device and the body movement data. For the final project of that class, I did a dance collaboration with my friend Ann. I was pretty amazed by how the human body was recognized and captured.

I had this idea of doing human size photogram to show the human movement. According to Wikipedia, “a photogram is a photographic image made without a camera by placing objects directly onto the surface of a light-sensitive material such as photographic paper and then exposing it to light. The usual result is a negative shadow image that shows variations in tone that depends upon the transparency of the objects used. Areas of the paper that have received no light appear white; those exposed through transparent or semi-transparent objects appear gray” (https://en.wikipedia.org/wiki/Photogram). Then I found a photographic artist Floris Neusüss who did human size photograms (http://www.vonlintel.com/Floris-Neususs.html). I contacted the gallery inquiring about the process and materials and I heard back from them with the answers I needed. However, given the fact that this idea has a really strict requirement on the space, a darkroom with enough space with a big enough pool/bathtub for developing prints, and also the materials, customized size/unusual big size photo papers, which would potentially elevate the cost of the project by a fairly large amount as well as the time consumption. I decided to pivot it.

Instead of analog media taking up the entire project, I thought it would be a good idea to bring digital into the field. Kinect can sense and record body motion data in digital form, and film photography is an analog way to record things. I started paying attention to the contrast and different between these two means. Although we live in an analog world, almost every single aspect has been heavily digitized. When you go to a concert, you see a wall of iPhones screen lit up; when you go to a museum, you see people with lenses capturing people striking poses with the art works; people read pdfs; etc. Almost all the analog media have at least one or multiple replacements that feature convenience on user’s side when it comes to distribution, utilization and manipulation.

Having dance as the as the content that shared by digital and analog approach of data recording, I started looking for media for presenting the data. AJ introduced lenticular and gifpop to me. Lenticular printing is a technology in which lenticular lenses (a technology that is also used for 3D displays) are used to produce printed images with an illusion of depth, or the ability to change or move as the image is viewed from different angles. I thought this would be a good way to present digital data which essentially is a short snippet of the dance piece and that data is in point-cloud form since digital recorded data can be easily modified and that directly shows how the Kinect device is sensing and selecting the samples, which is those dots where infrared light it emits lands. Same snippet of dance piece was also recorded on a long-exposed negative. After developing the negative, I printed it out with an enlarger onto a light-sensitive photo paper. Each fragment of the dance piece has two presentations with one being long-exposure film print and one being point cloud lenticular sheet, and in total 10 fragments will be displayed sequentially to communicate the entire dance performance.

The idea of this project is a culmination of my skill set as I am applying the film photography techniques I learned in Prague with the Kinect motion sensing skills I learned in IMA. A wholly original concept, this project dares to mix means of media that haven’t been mixed before and is an opportunity for me to contribute to the fields of work I have always admired in motion capture, film photography, and performance based art, while starting quality documentation in areas that have been ill documented, like lenticular printing.

Since I had experience with film photography before, I was pretty confident the analog output of this project would not be a challenge compared to making lenticular sheet. I started off with doing research on lenticular techniques. Here’s the general procedure I summarized: order lenticular sheet, pitch testing, interlace images, print, lamination (please go to the end of this post for a more detailed DIY lenticular tutorial). Lenticular technique has a couple of effects – flip, 3D, morph, and motion. Flip makes an image flip from one image to the next. 3D effect creates depth on a normally flat surface. The 3D Effect effect is generated by splicing several frames together to trick the viewer into seeing the 3D effect. Morph effects gradually change one image to another image through the use of sophisticated image algorithms. Motion effect uses multiple frames of an action to show movement from the beginning to the end. In my case, motion would be the effect I need.

Making lenticular sheet relies heavily on a good printer. The school printer has the maximum of 1200 DPI. Lenticular sheet has one configuration which is LPI (lenticules per inch). Since the images have to be interlaced, the number of frames of images being used multiples LPI of the lenticular sheet should be no more than the maximum DPI of a printer. I started with purchasing lenticular sheets with a relatively low LPI, 25 and 32 from this store. After I received them, I realized they might be too thick for a lenticular sheet, but it could be a good testing round. I did pitch testing, which is essentially a calibration tool. It calibrates the printer, media and lenticular sheet used for a particular image. The purpose of the pitch test is to determine which LPI pitch matches the particular printer/media/lenticular sheet combination. Since output devices may have slight differences in variability, pitch test is needed on each output device you intend to print interlaced images to. Shift your viewing angle left and right. Look at each bar and determine which bar gives you the widest flip from solid black to white across the entire width of the printed area. The bar that represents the best (widest) flip is the proper LPI that you need to interlace your files to. 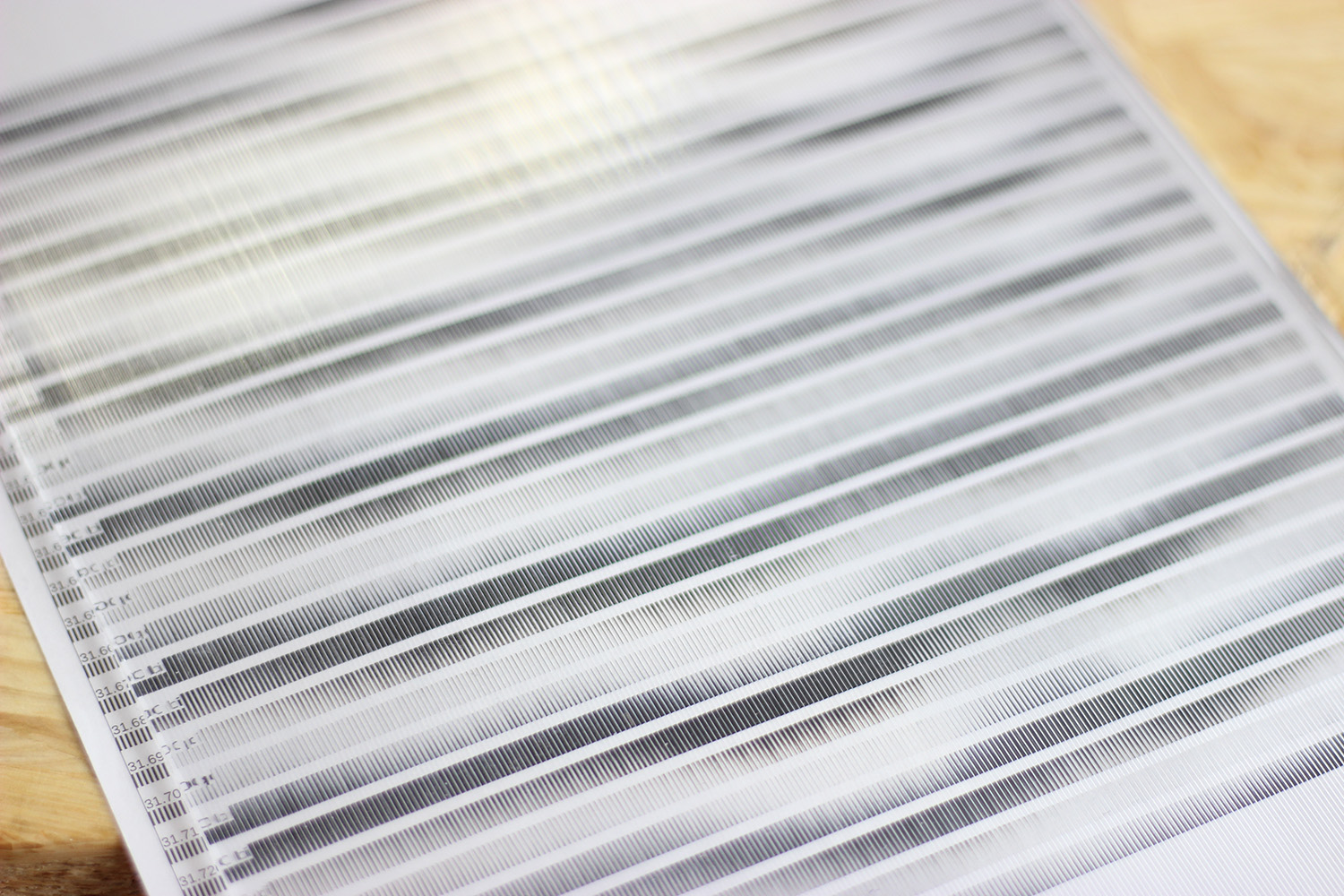 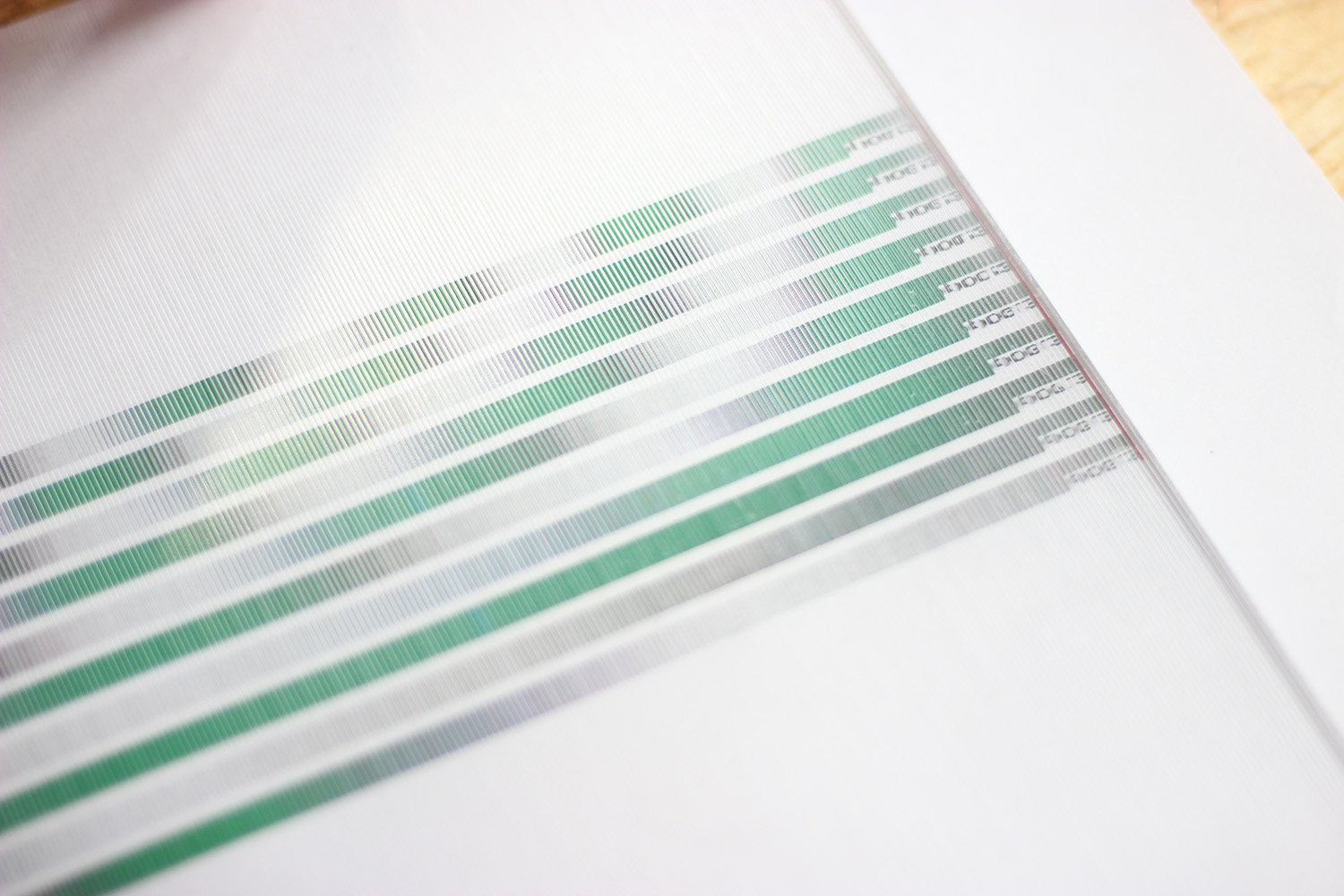 It turned out that the 32 LPI was actually 31.56 LPI. I decided to make a lenticular testing with a gif I found online to test the motion effect. 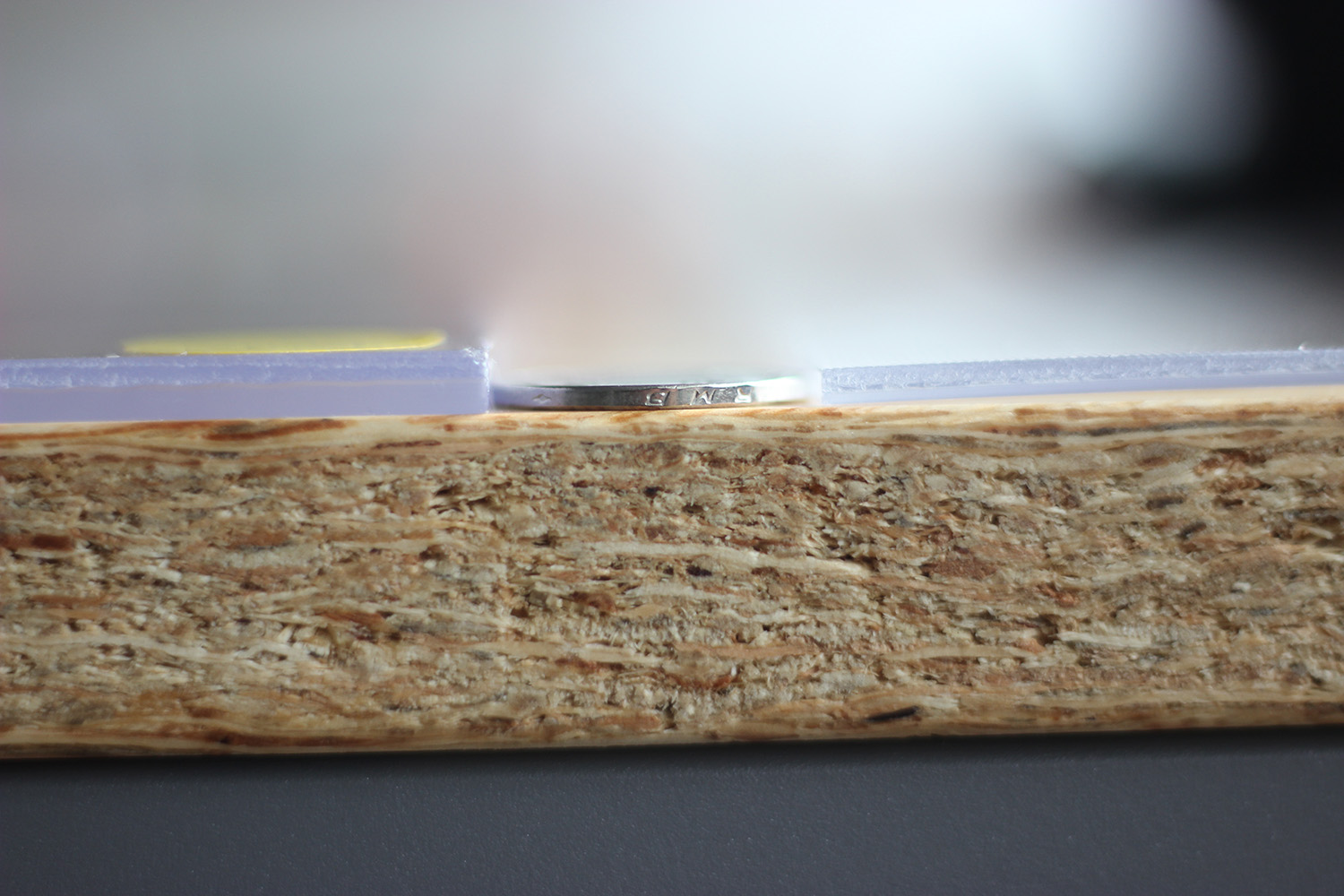 It worked. Since its a low LPI lenticular lens, the interlace lines/gaps are pretty obvious though. 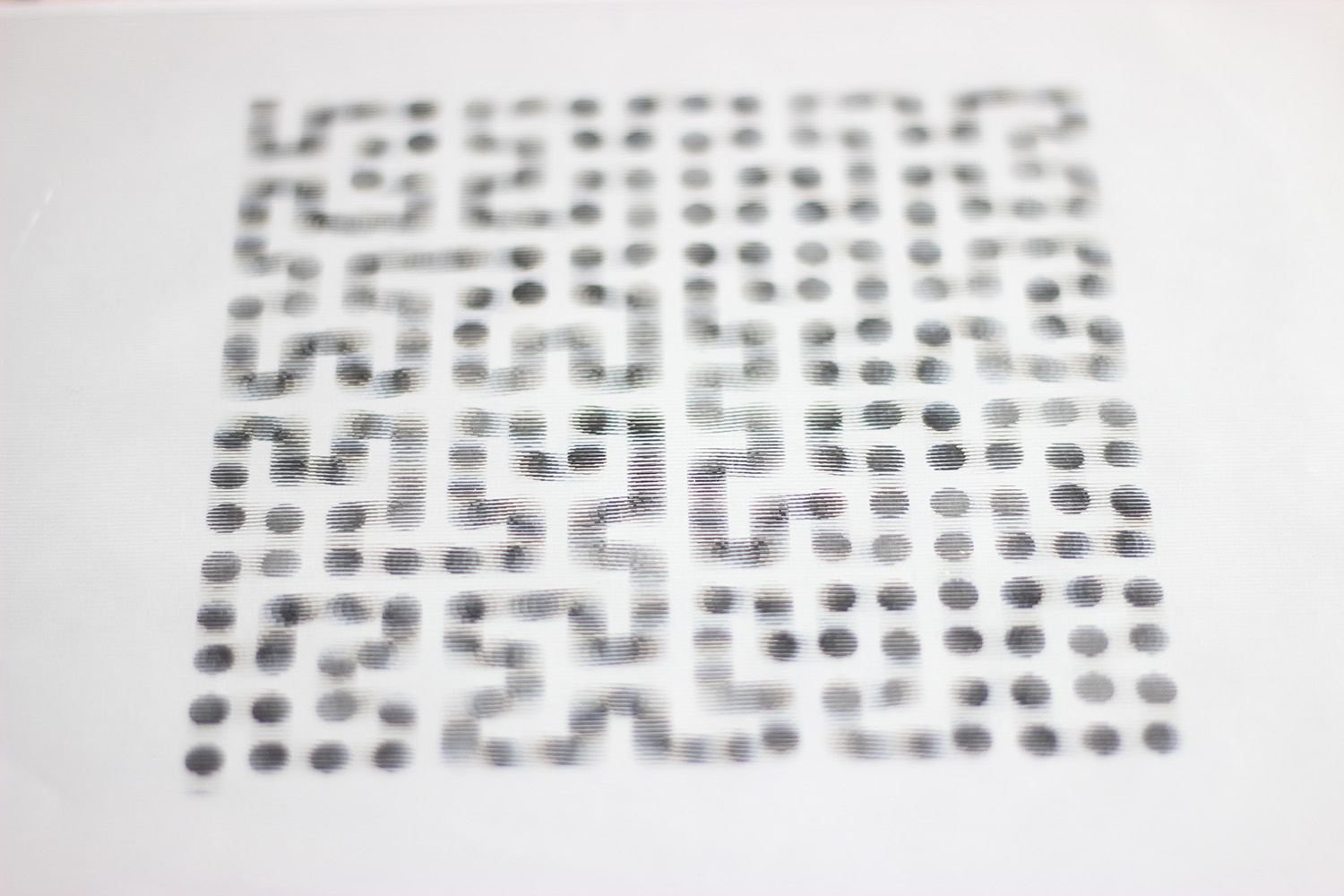 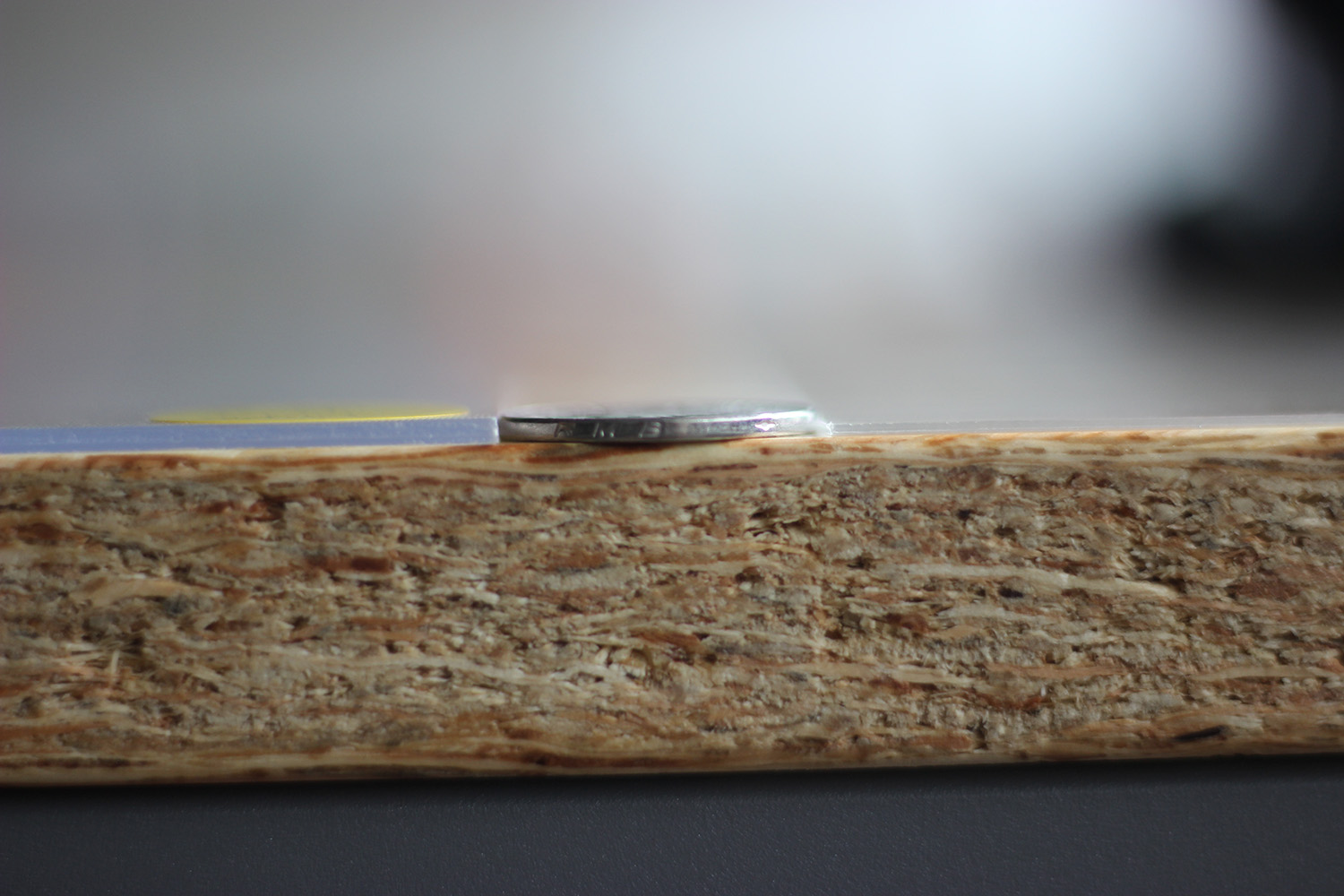 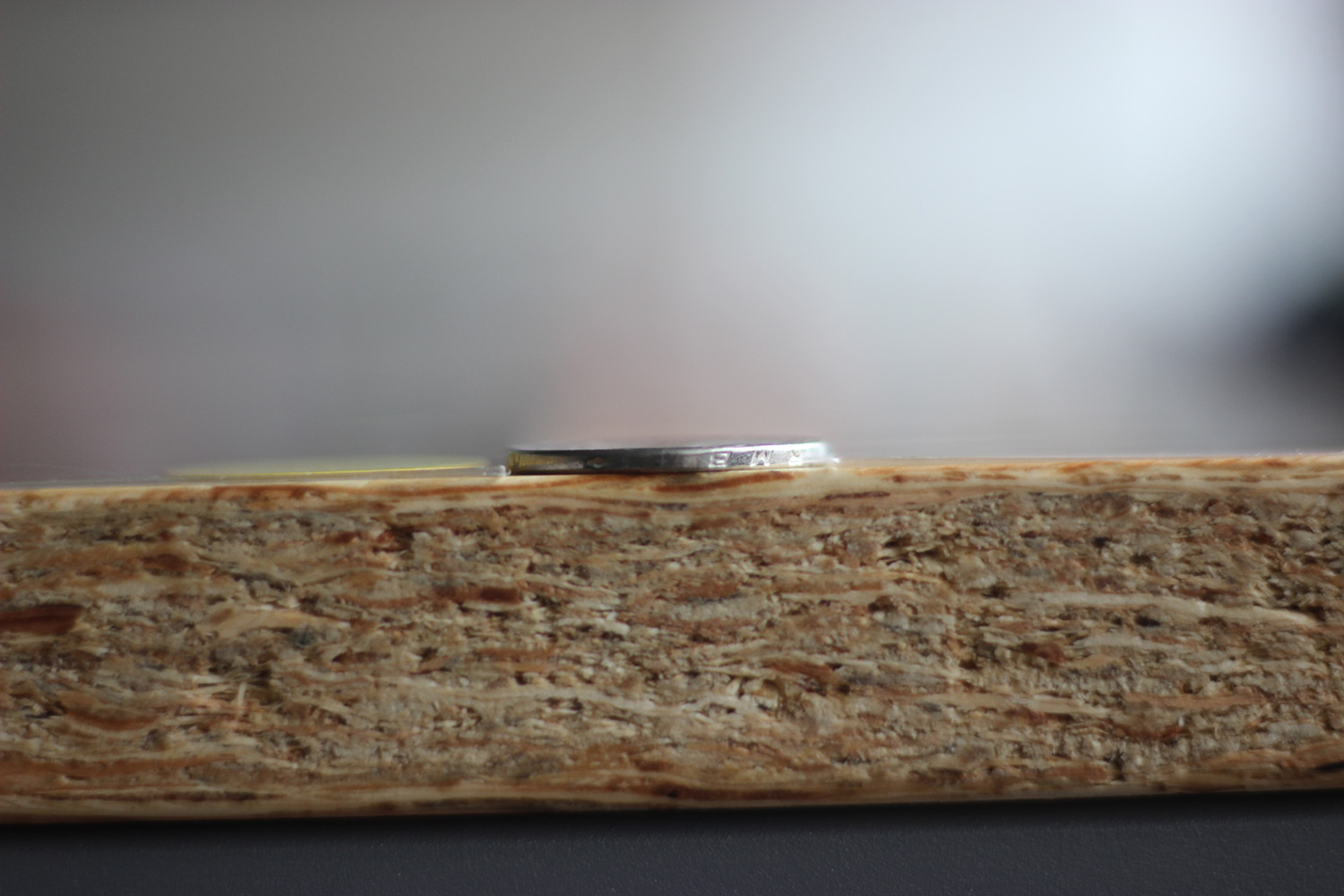 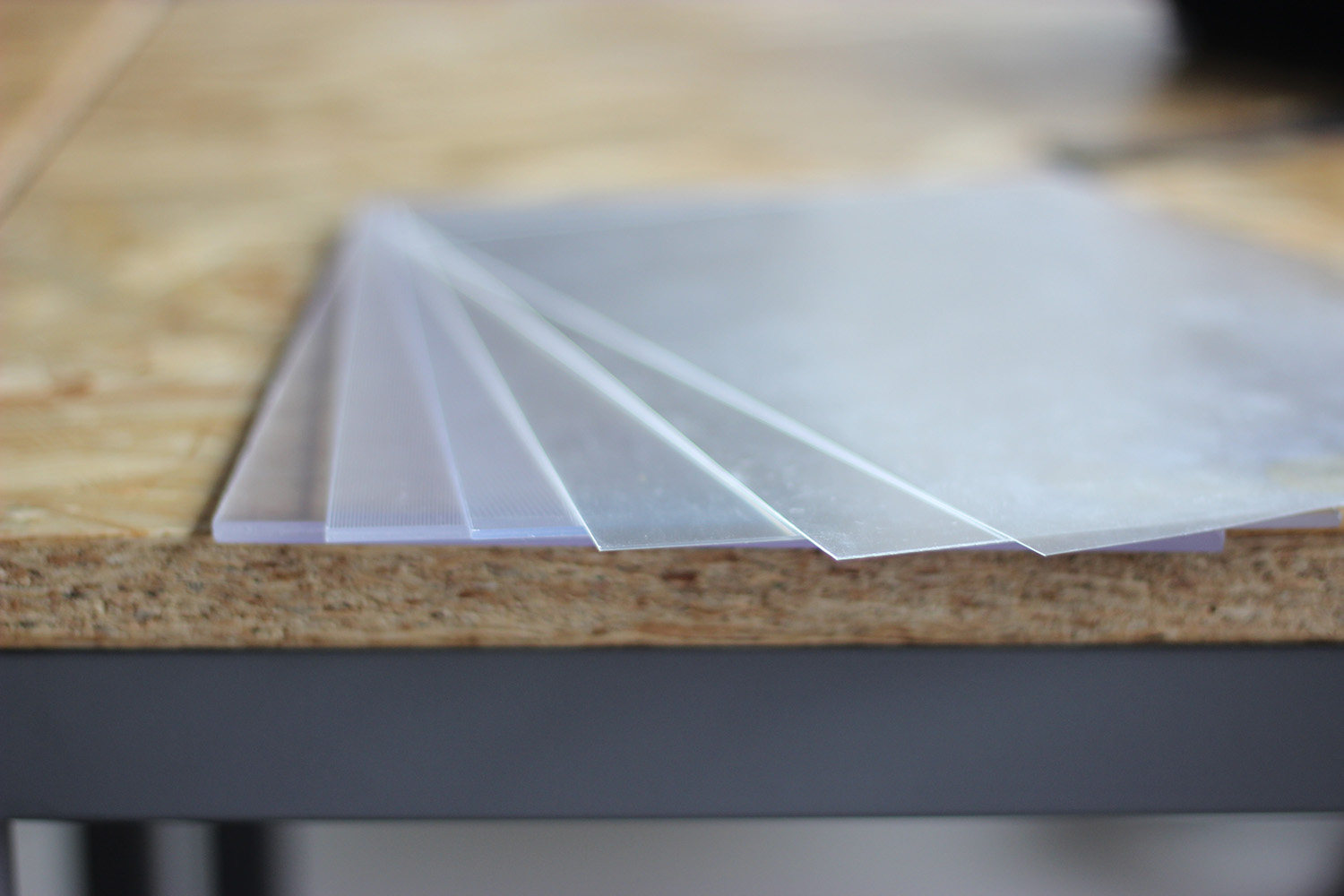 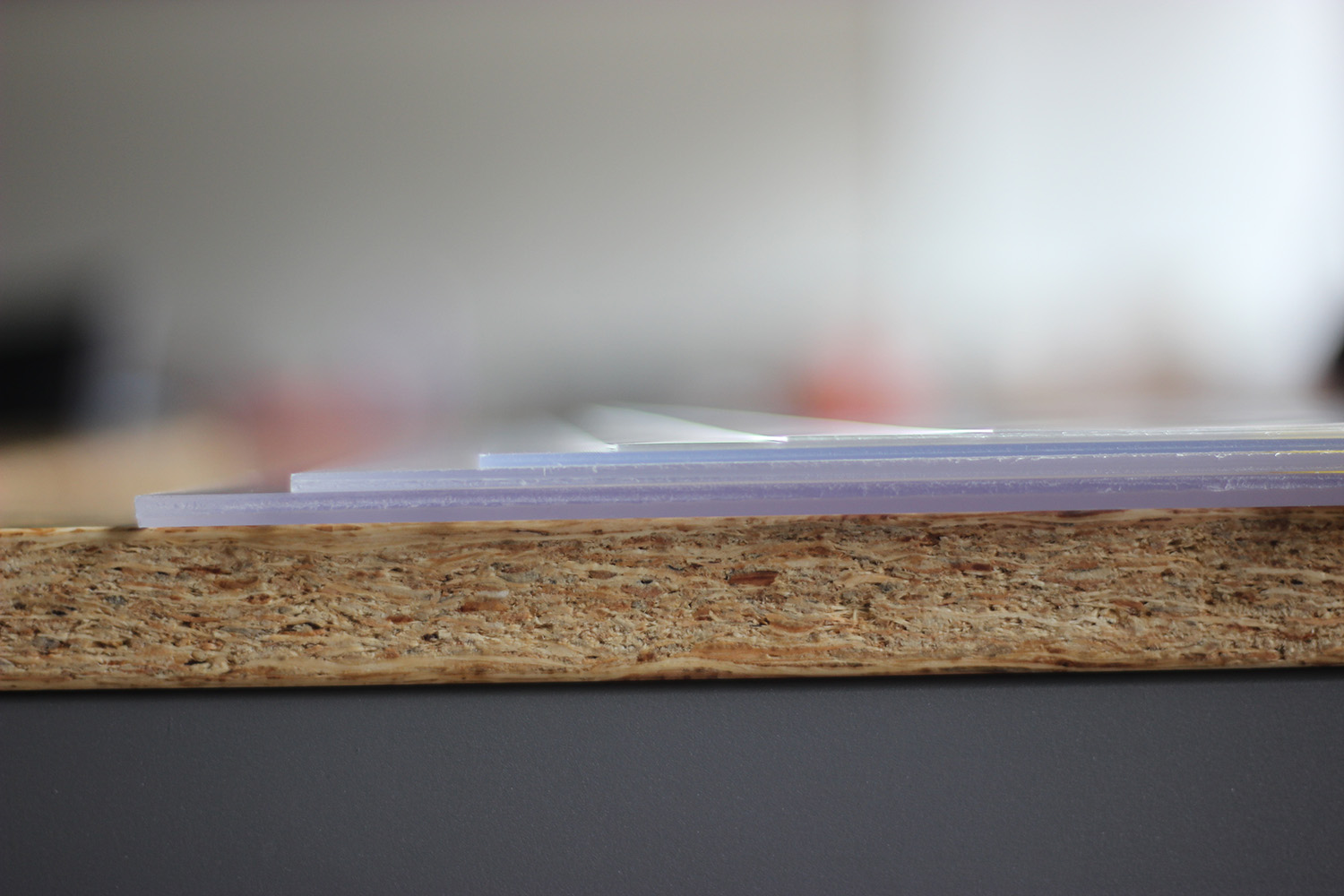 After taking into consideration the thickness, resolution, pitch test result and smoothness of the motion effect, I decided to go with 70 LPI lenticular lens.

I was trying to decide what sort of data visualization to show on a lenticular print, and someone told to apply colors of the specific infrared landing points captured by the normal camera in Kinect. I decided t it a try the video above shows how it turned out. I didn’t continue with this for two reasons with first being it didn’t look good, and the second, point cloud represents the essential sampling step in digital data processing. If I had to show color, a better camera would actually give me a better imaging of the dance movement movie with better color and resolution. It makes more sense to show point cloud with a lenticular lens. 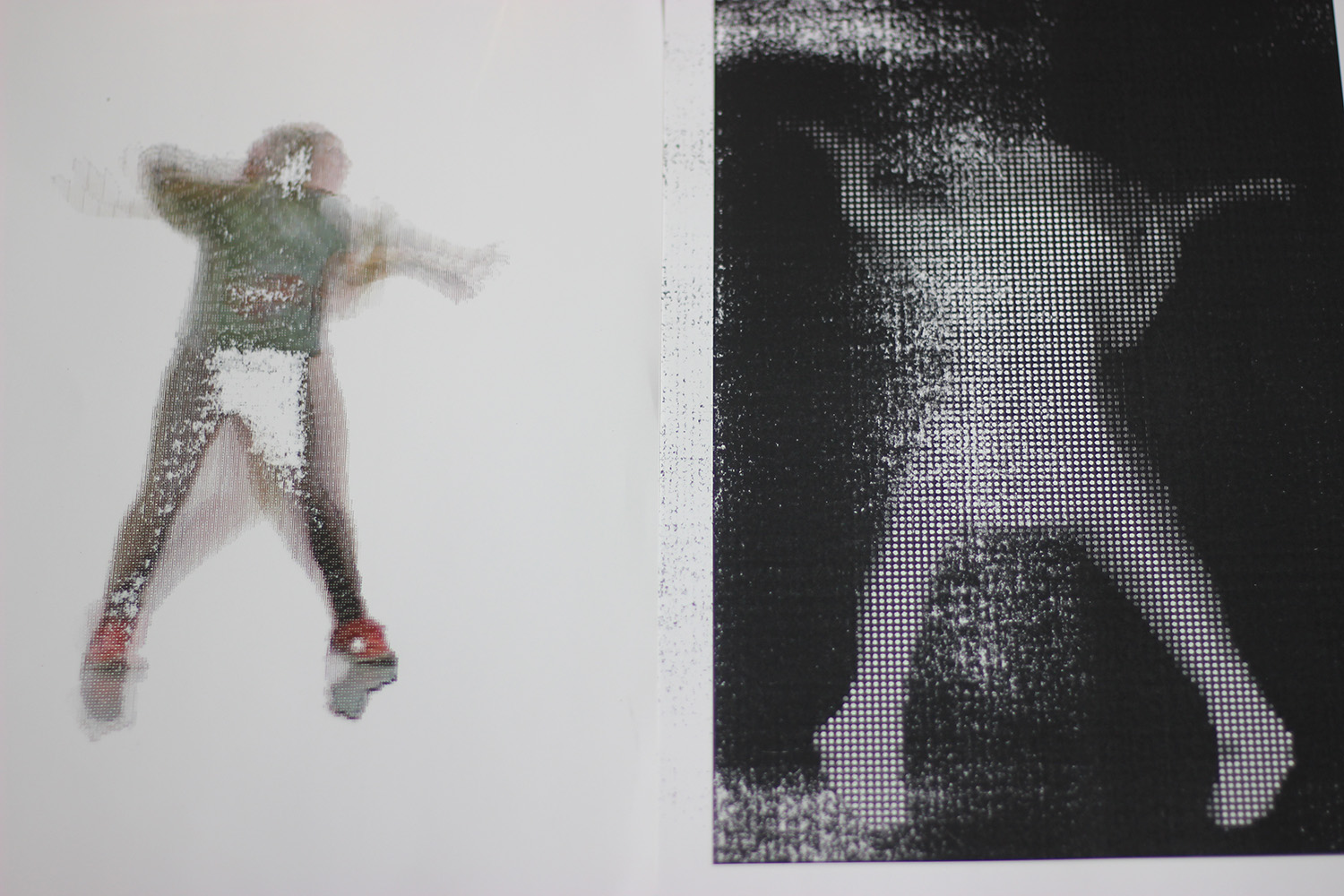 I tried to used different paper because based on my research, a better paper might make the effect smoother. However, the testing with 200g & 250g laser printing paper was a disaster. Although according to maximum of 300g paper.

I suspect that the ink wasn’t dry enough so it looked ruined. In normal cases, a high DPI ink printer would be better than a laser printer in lenticular printing. Thus I decided to stick with the NYU shanghai default printing paper. 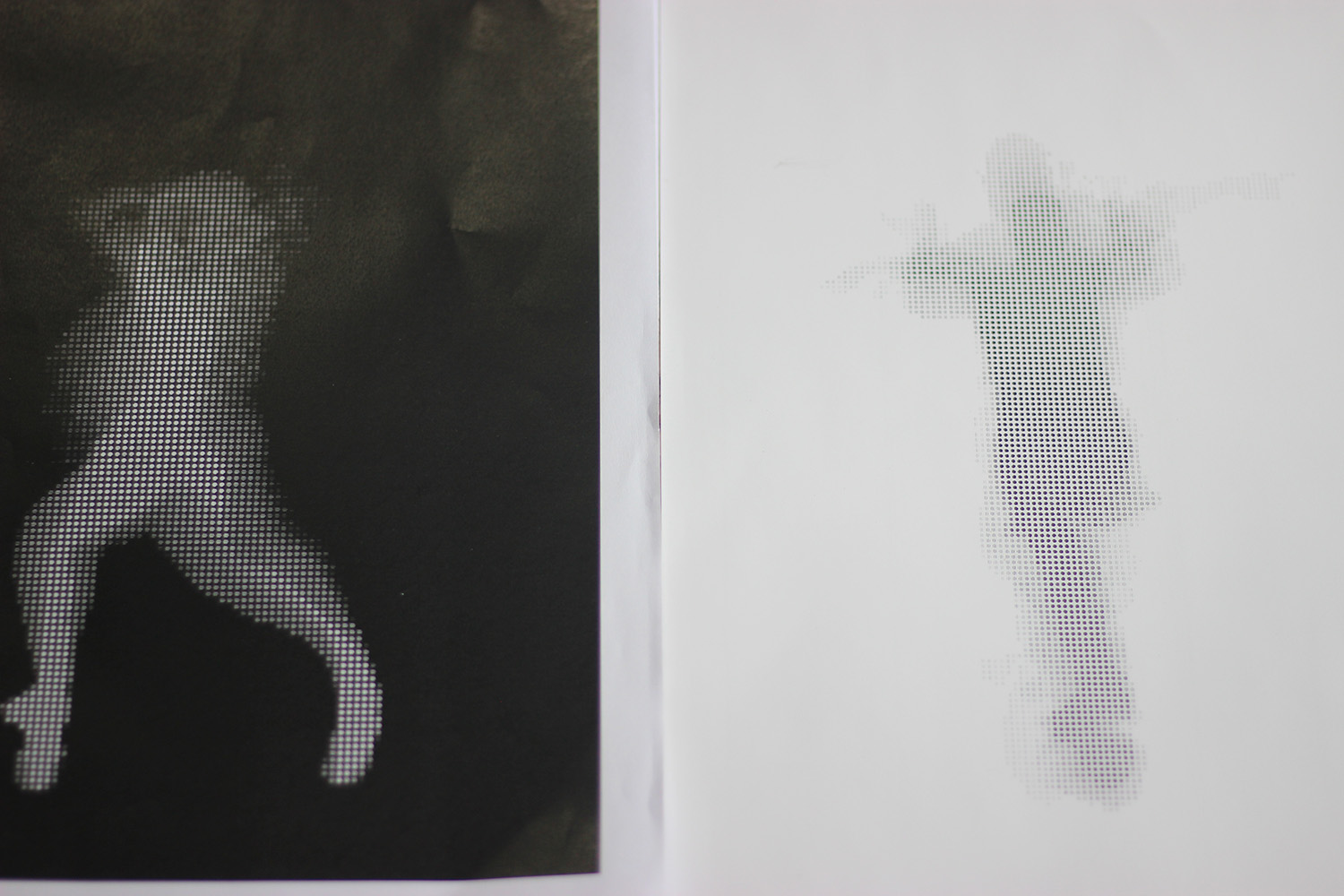 The basic procedure is to laminate paper to adhesive and then laminate them to lenticular lens. When laminate adhesive, I peeled half off, and laminate, then do the other half, this can decrease the annoying bubbles that always appear in the lamination process. Please see this tutorial video for further instructions.

Kinect + film camera on a tripod. I took 20 long-exposure (half second only) photos with the film camera, while recording 20 snippets of the dance performance with each being 25 frames (only 15 was selected). Framerate of the program was around 30 fps, so 15 frames would match what the camera captured. 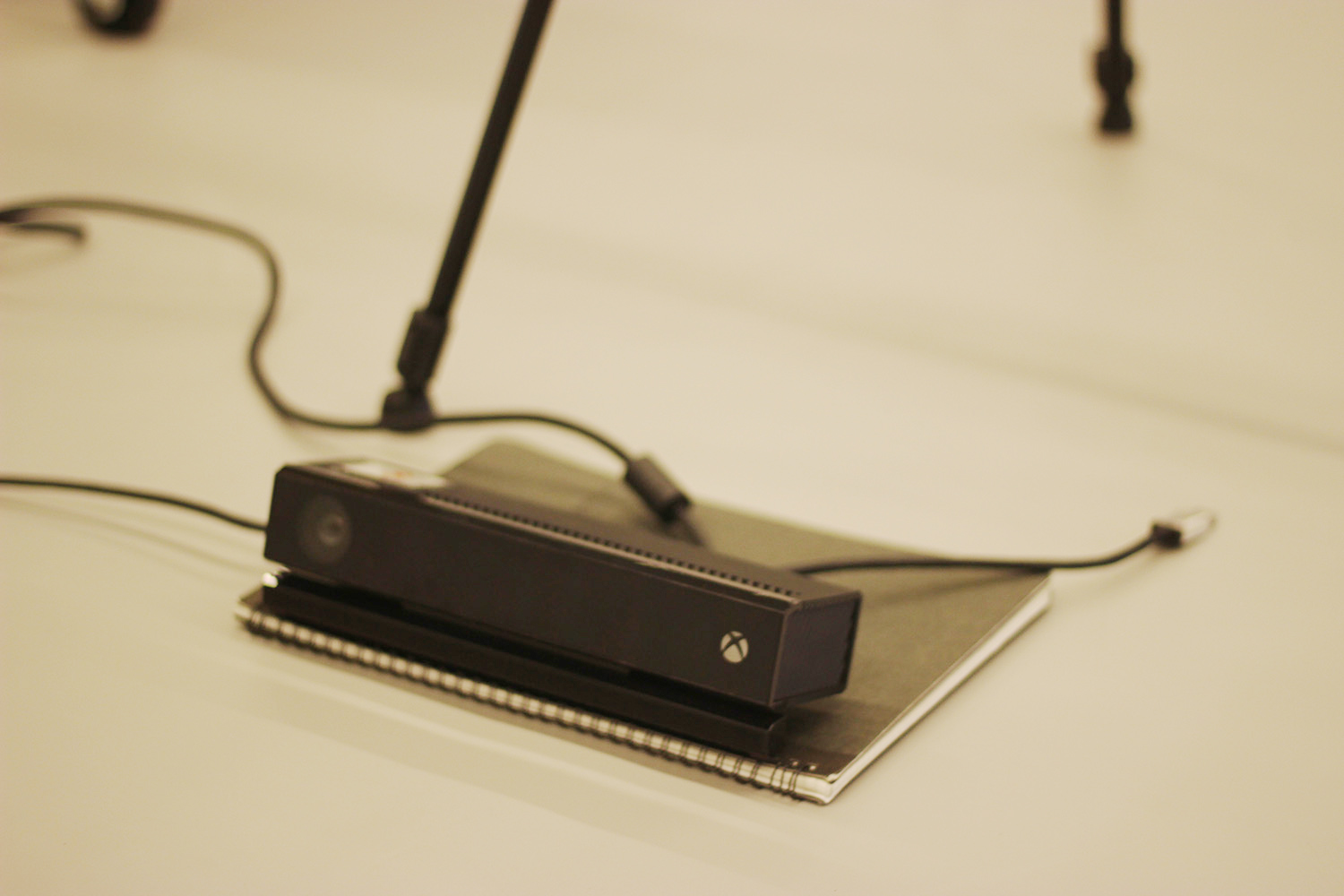 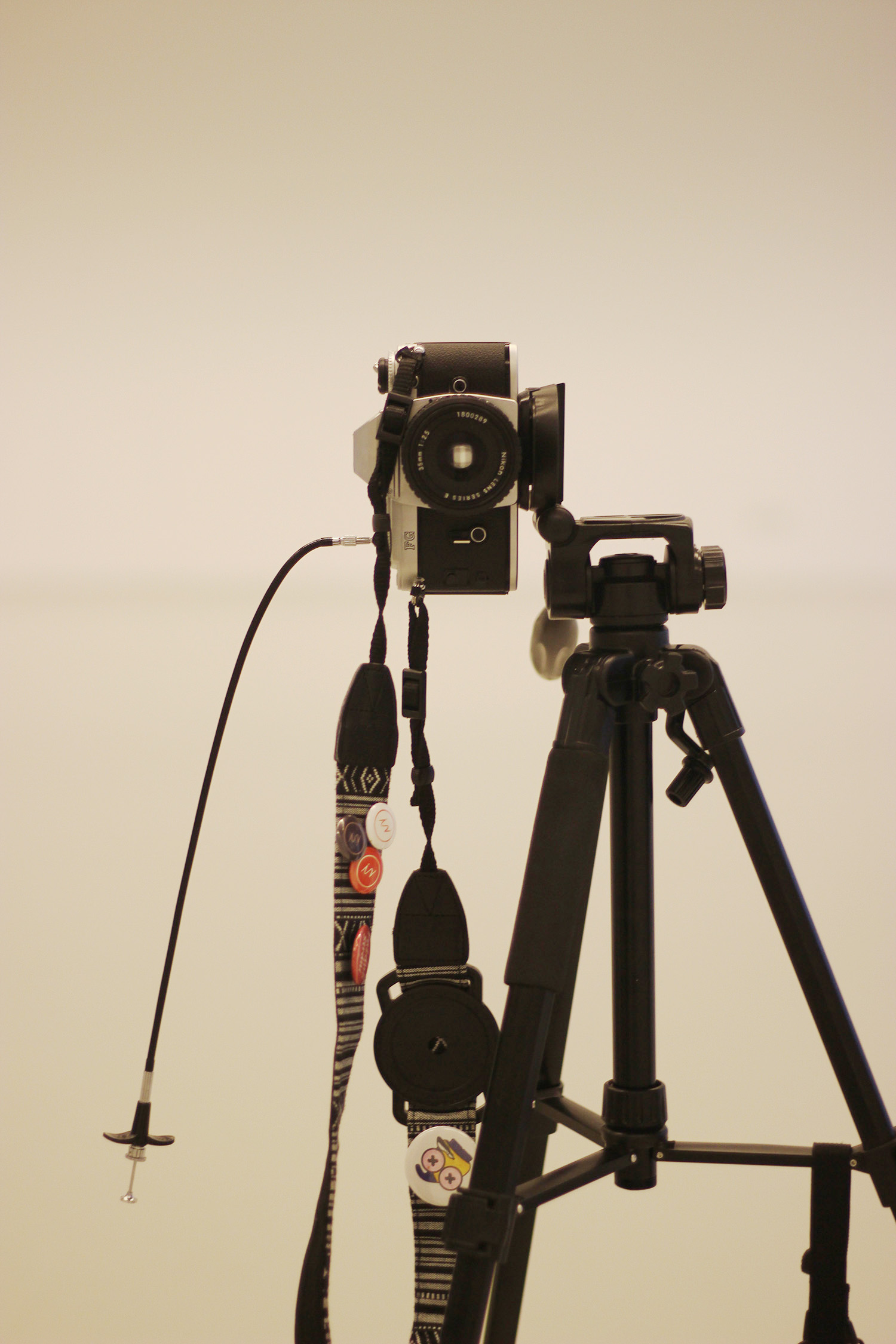 After movement was recorded with both methods, I went to the DN Darkroom in M50 to develop my negatives and printed the photos out. 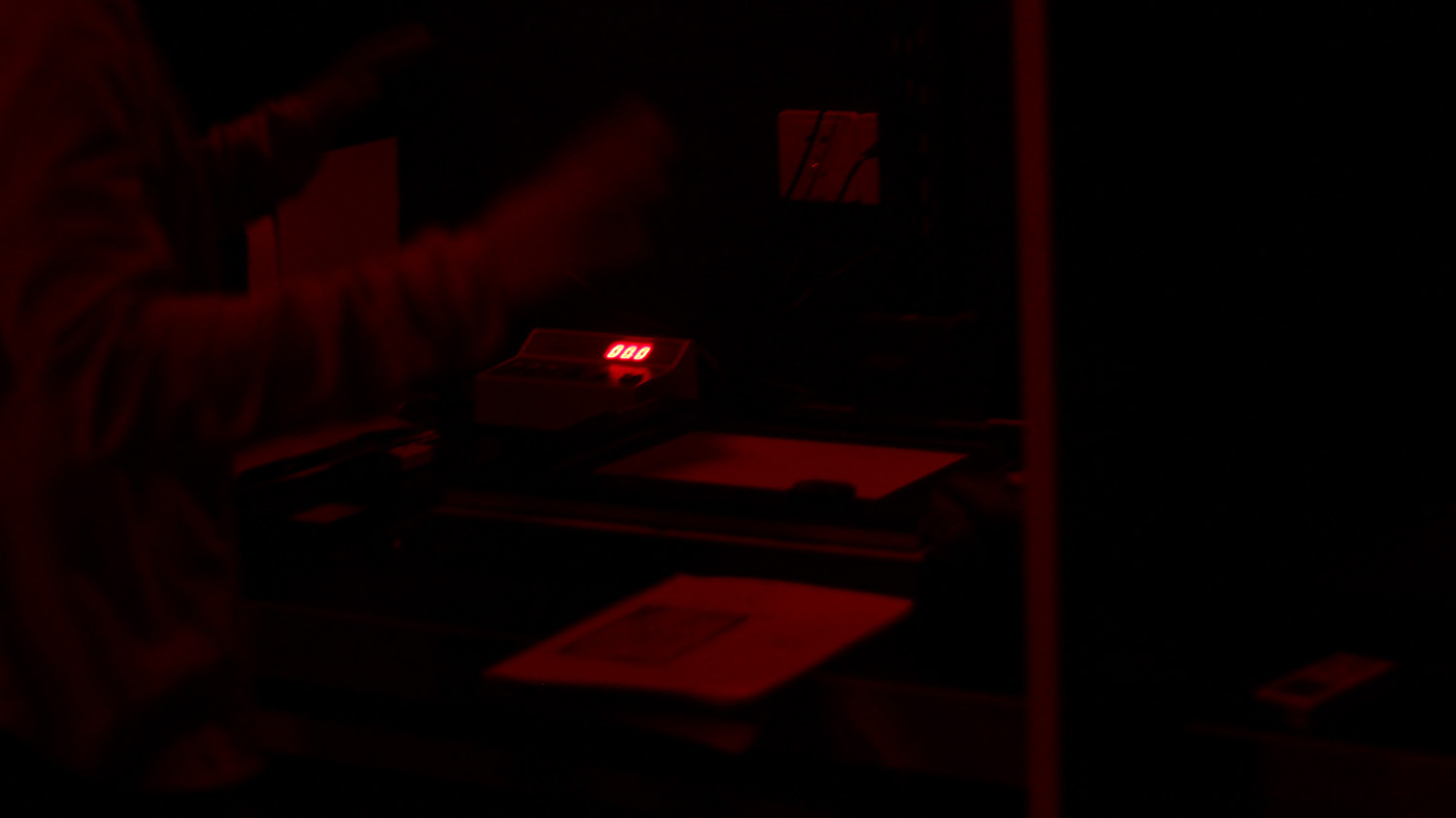 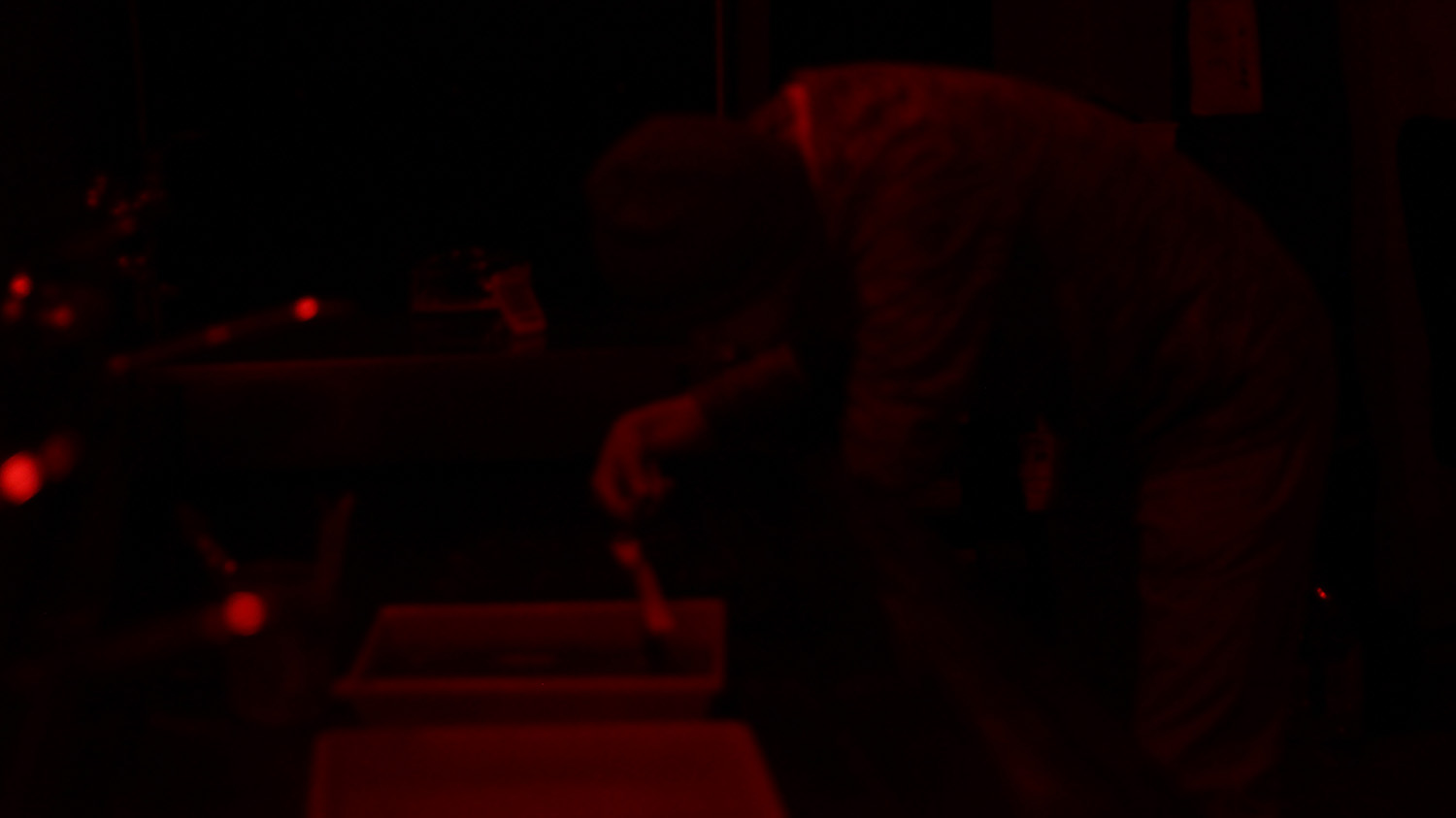 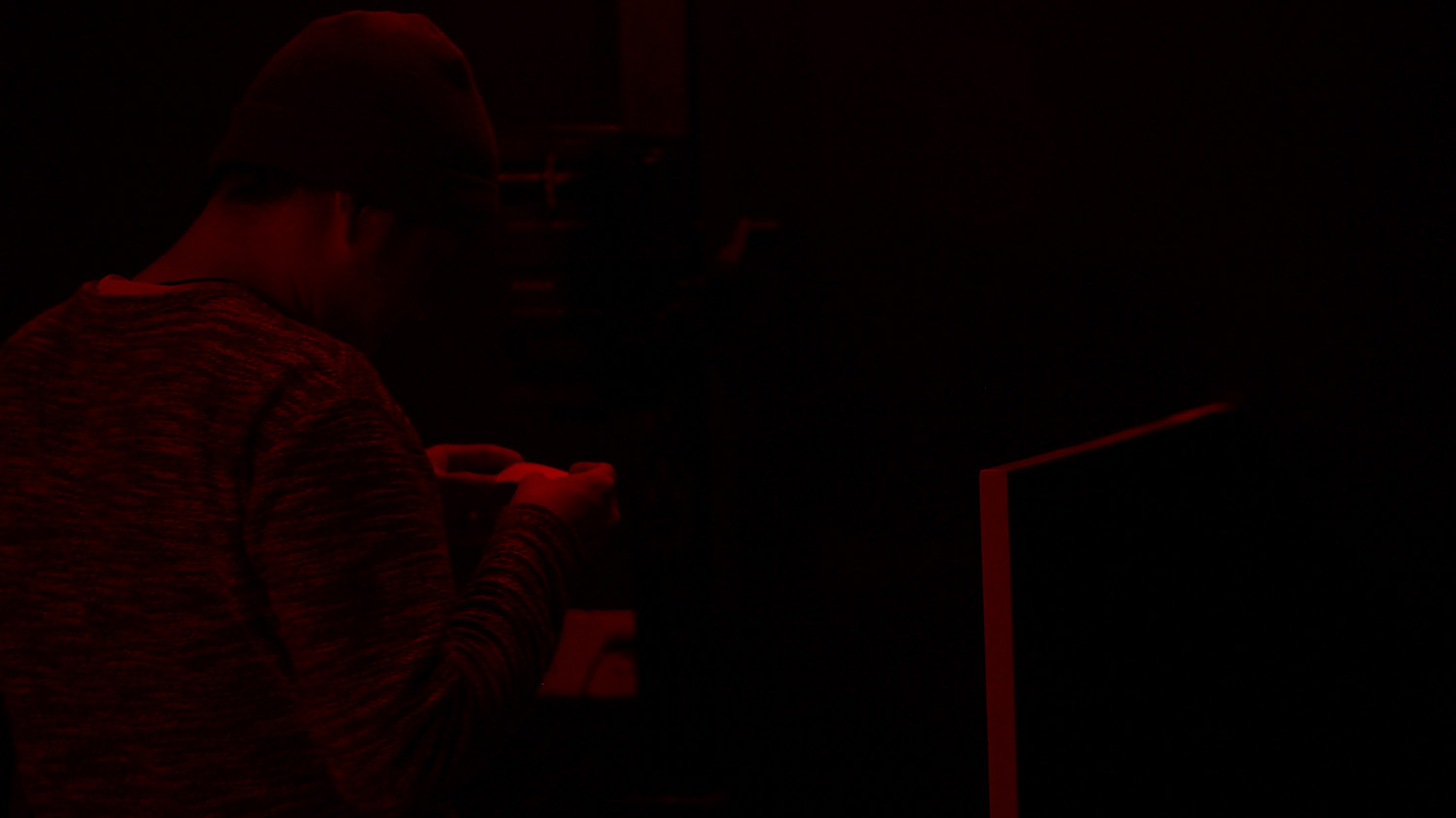 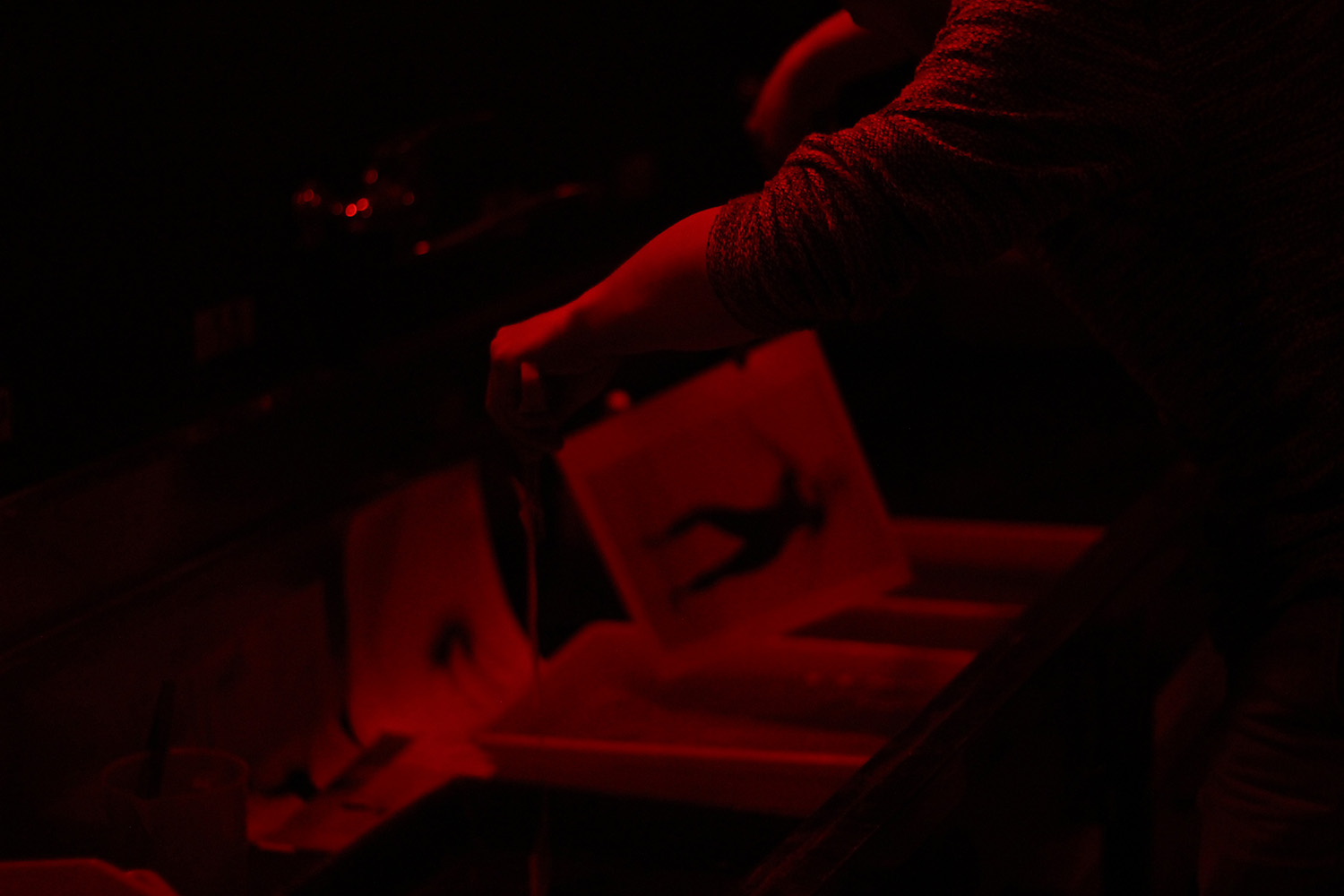 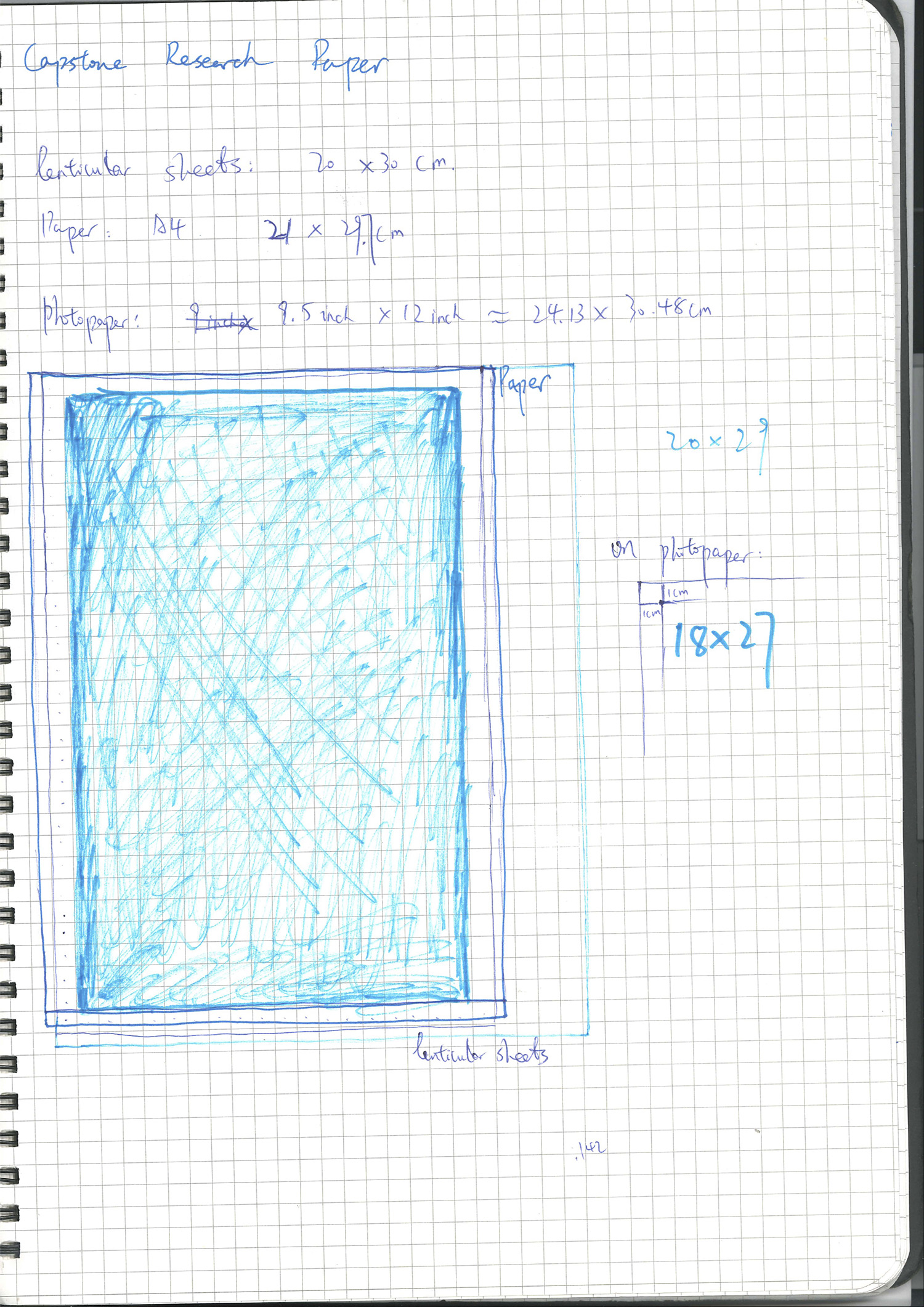 I decided to make the final size for both film photographs and lenticular prints to be 18*27cm which involved paper cutter and laser cutter(for lenticular lenses). 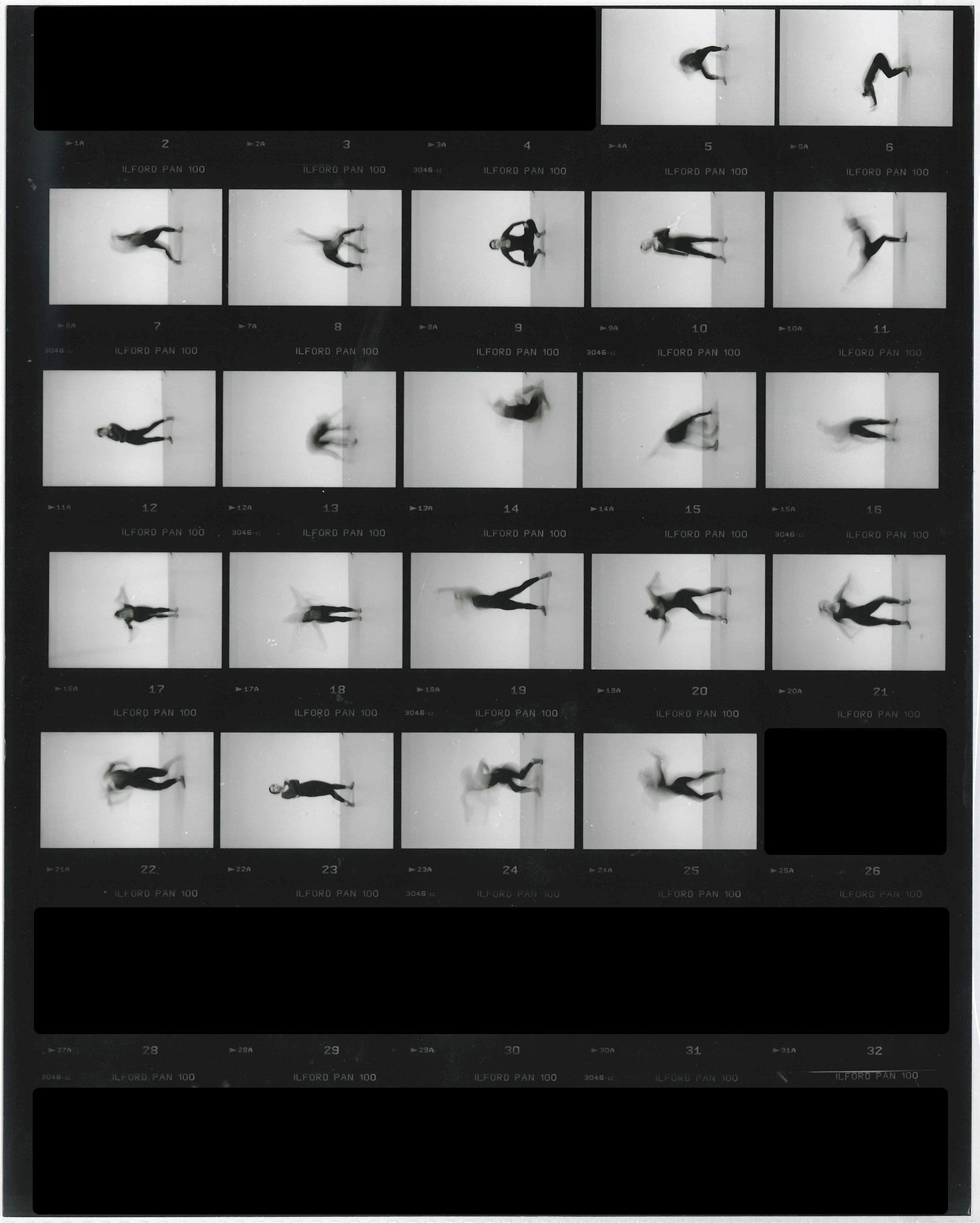 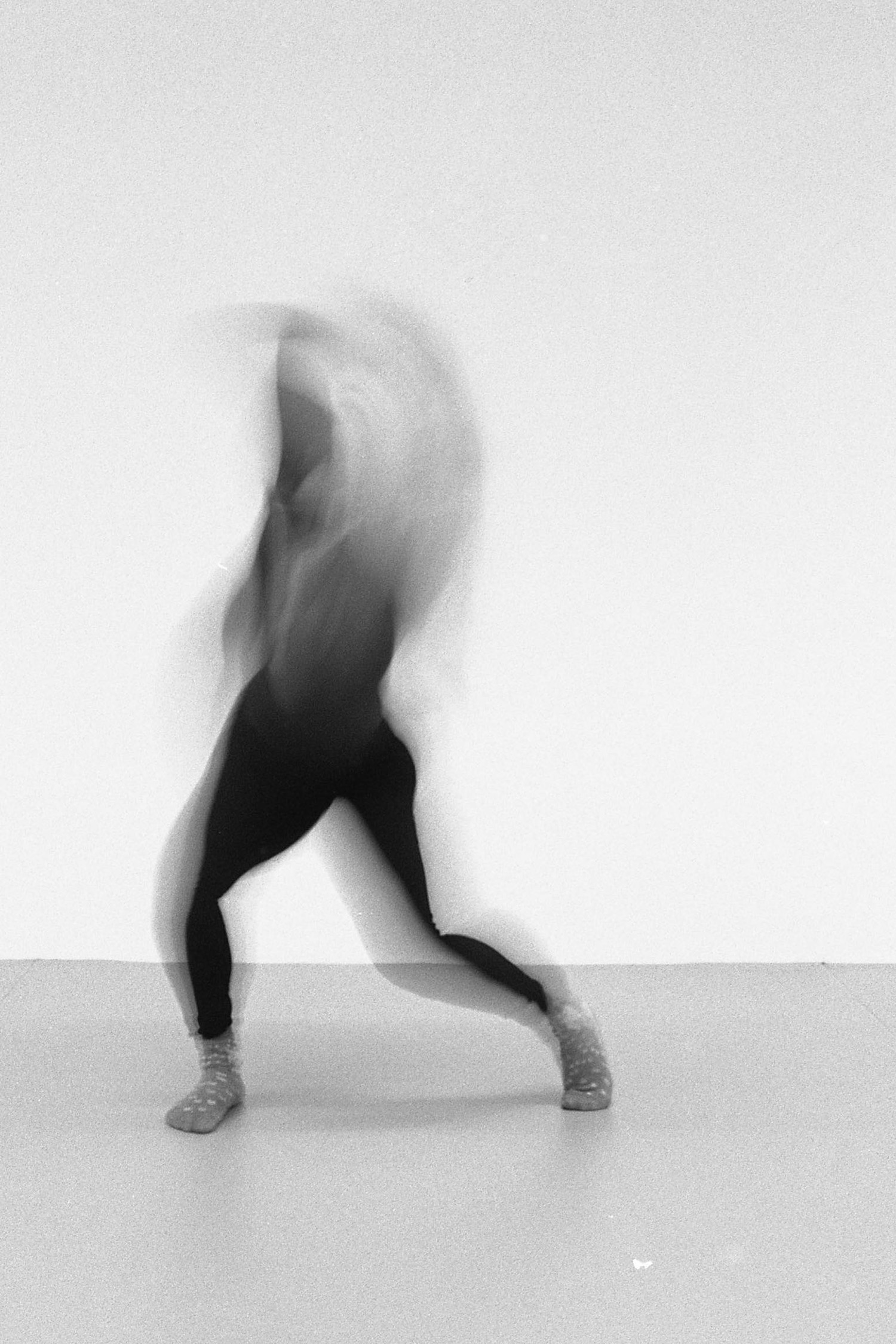 CREATING AND USING A PITCH TEST

How to interlace in Photoshop

I would like to thank all the following people for helping with my Capstone Project: 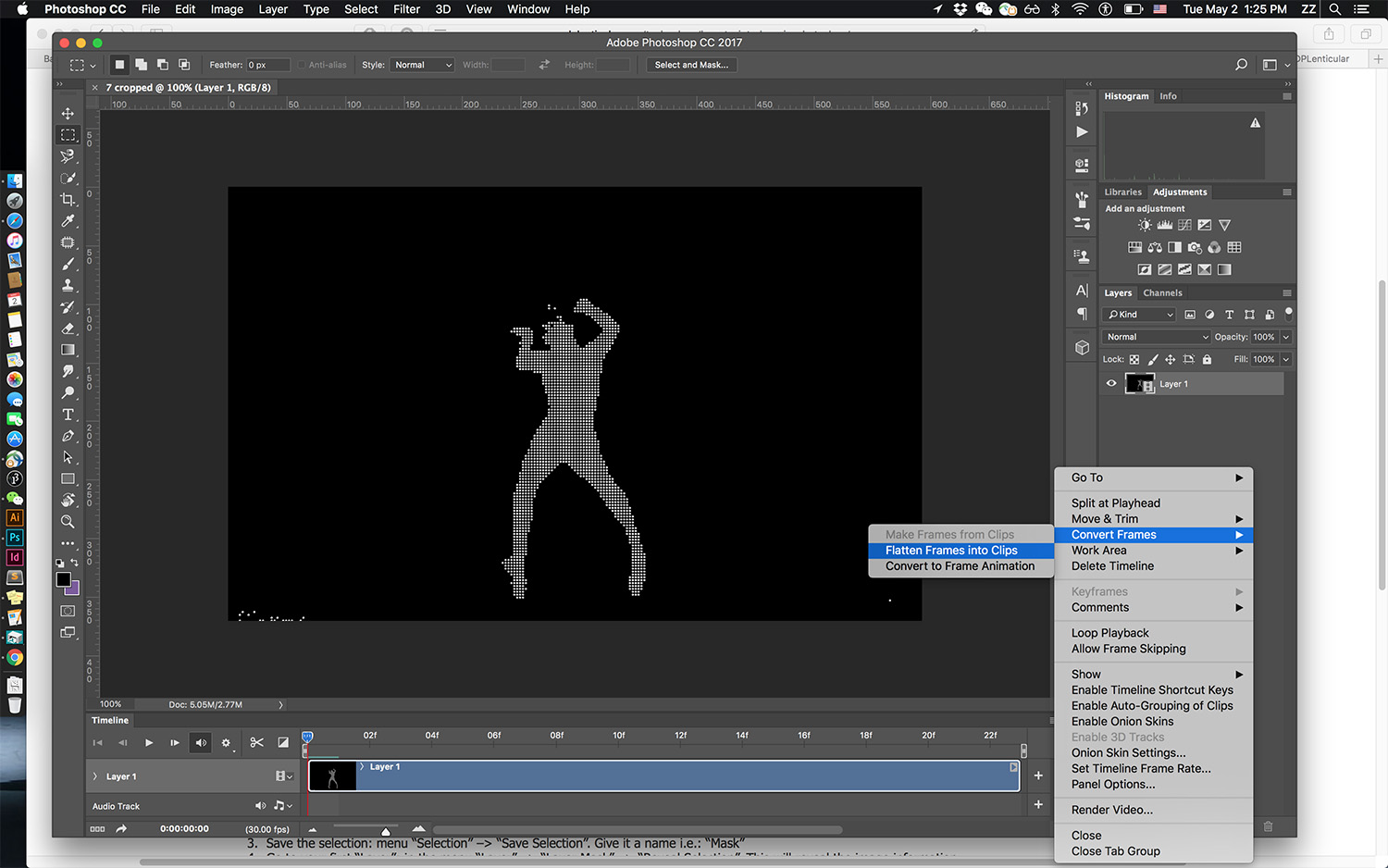 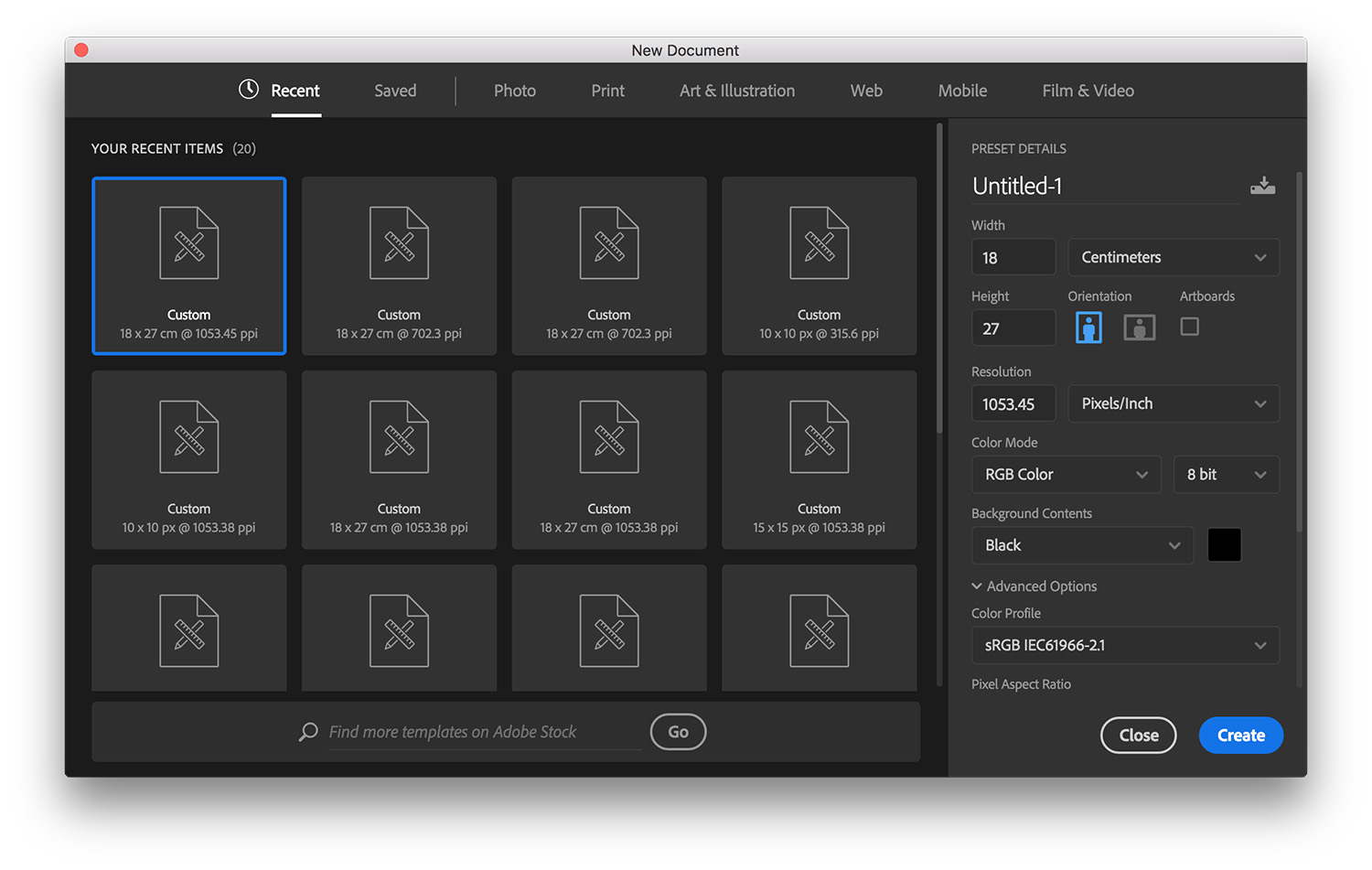 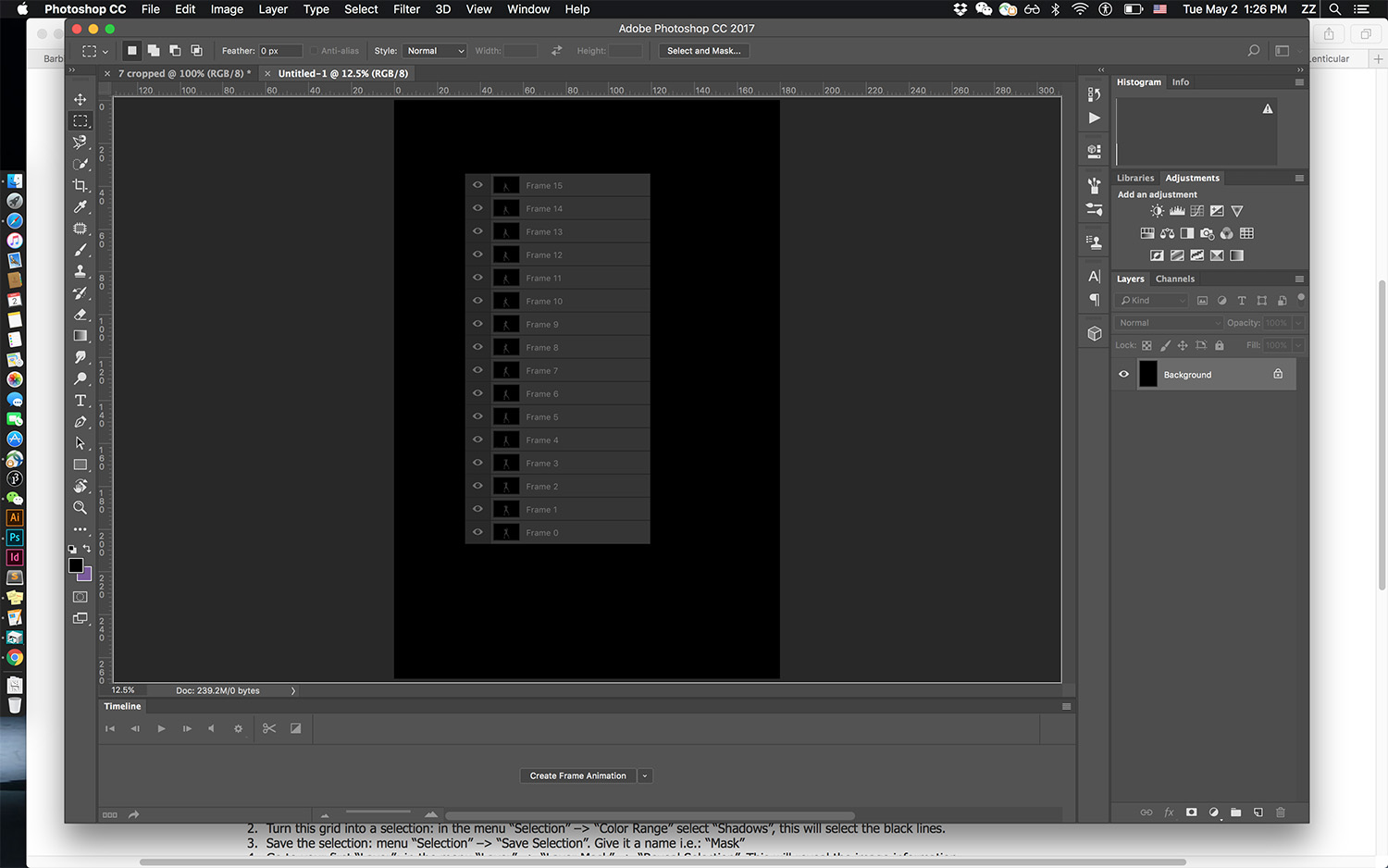 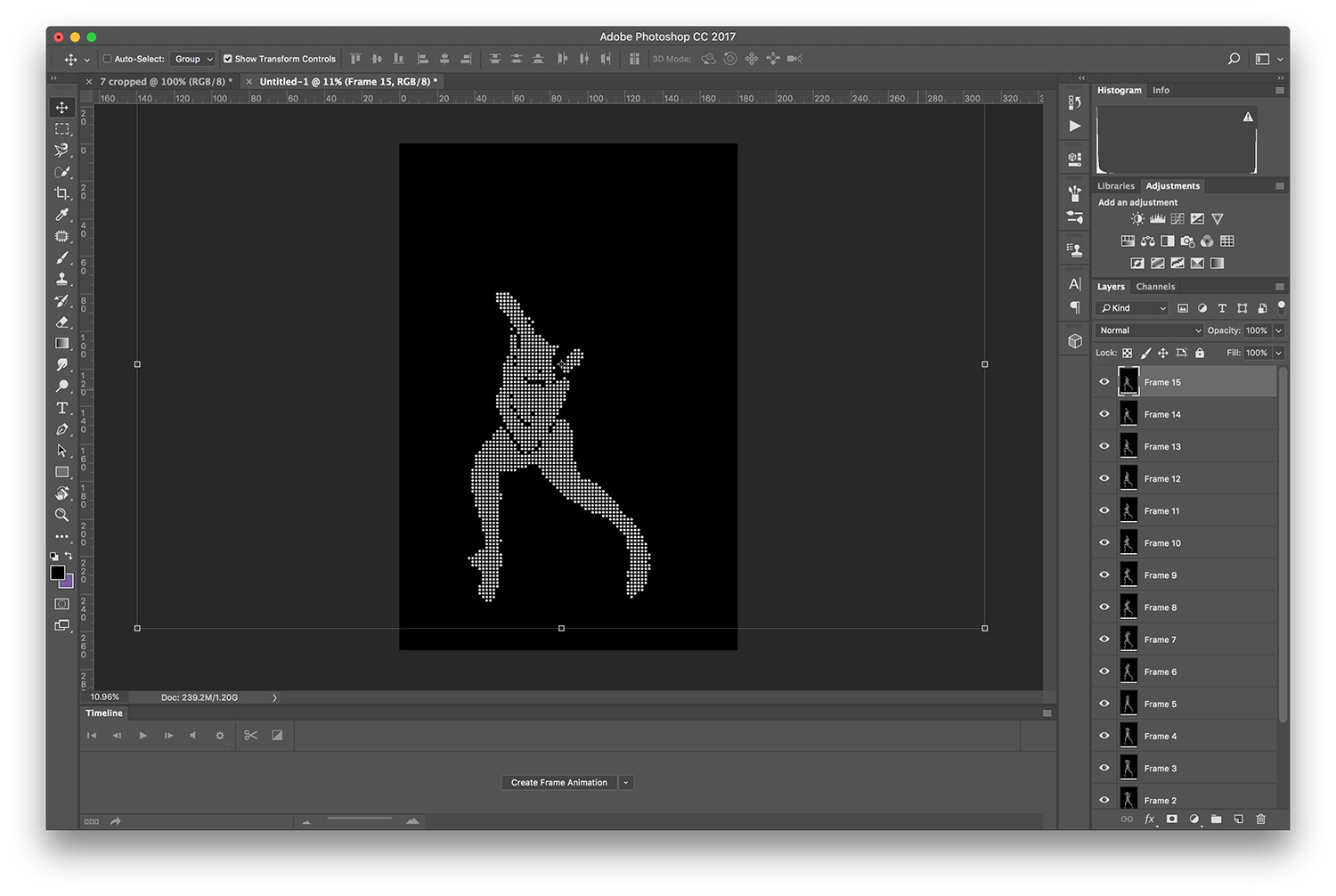 8 Create a new file from the menu< 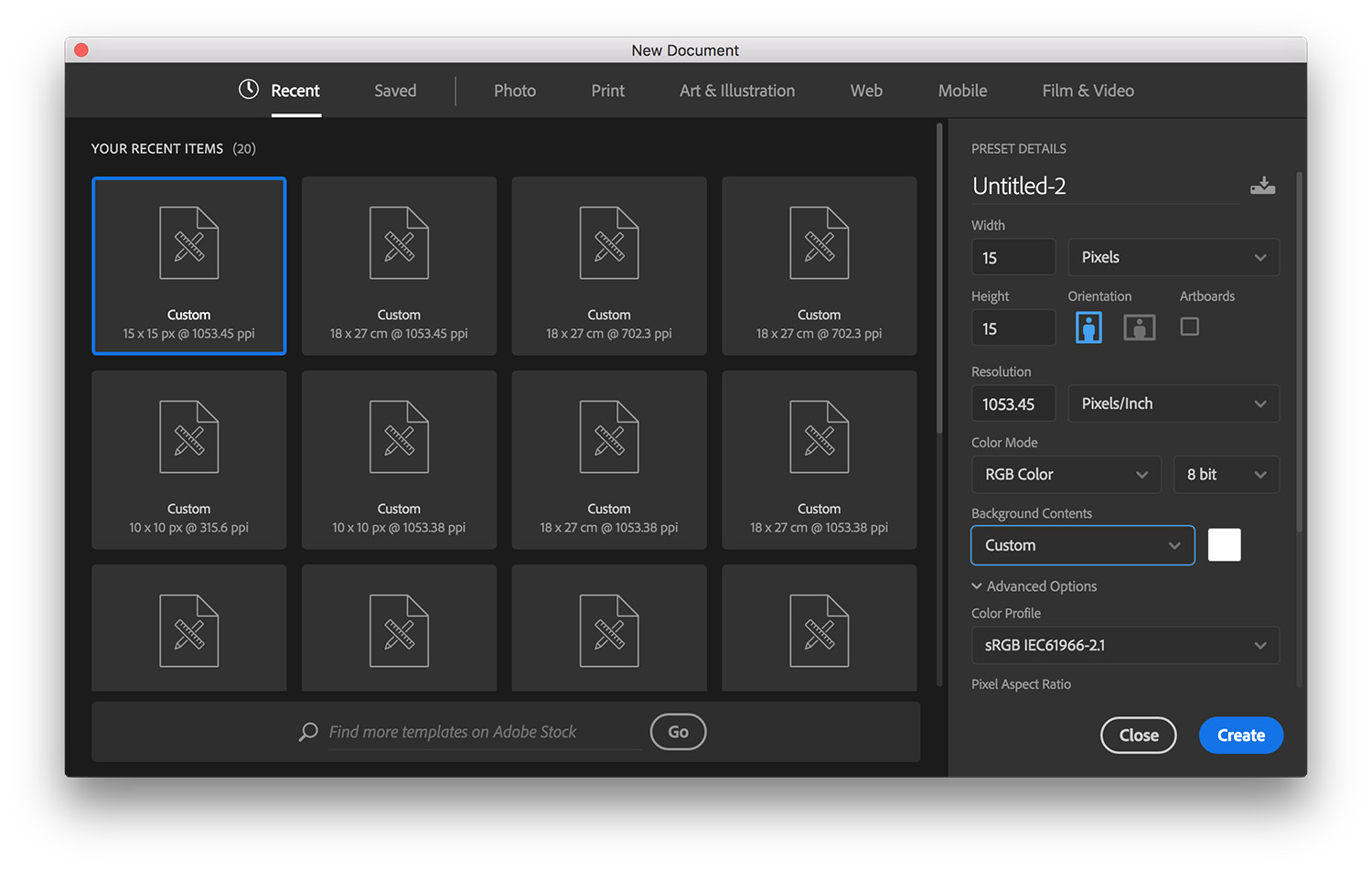 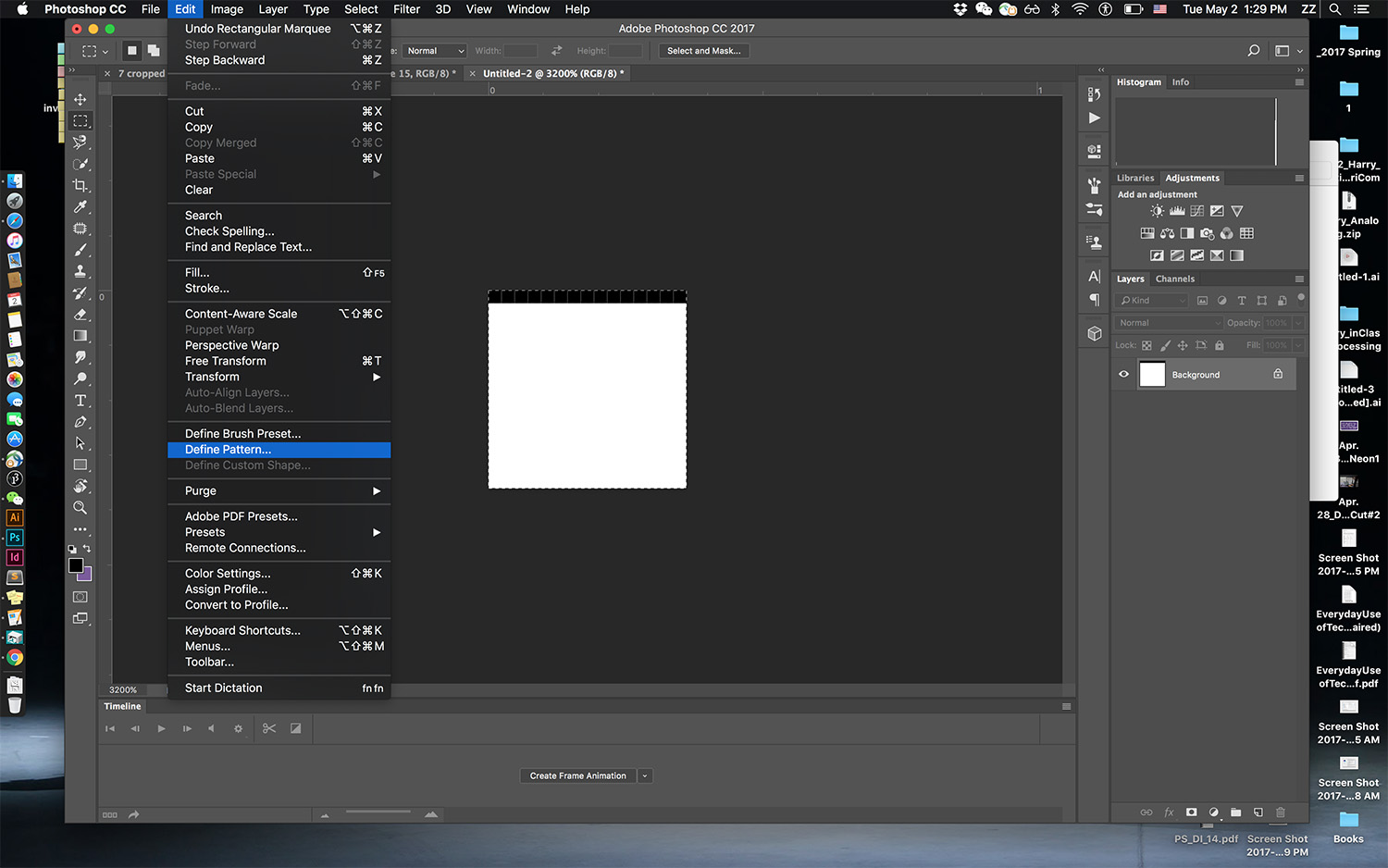 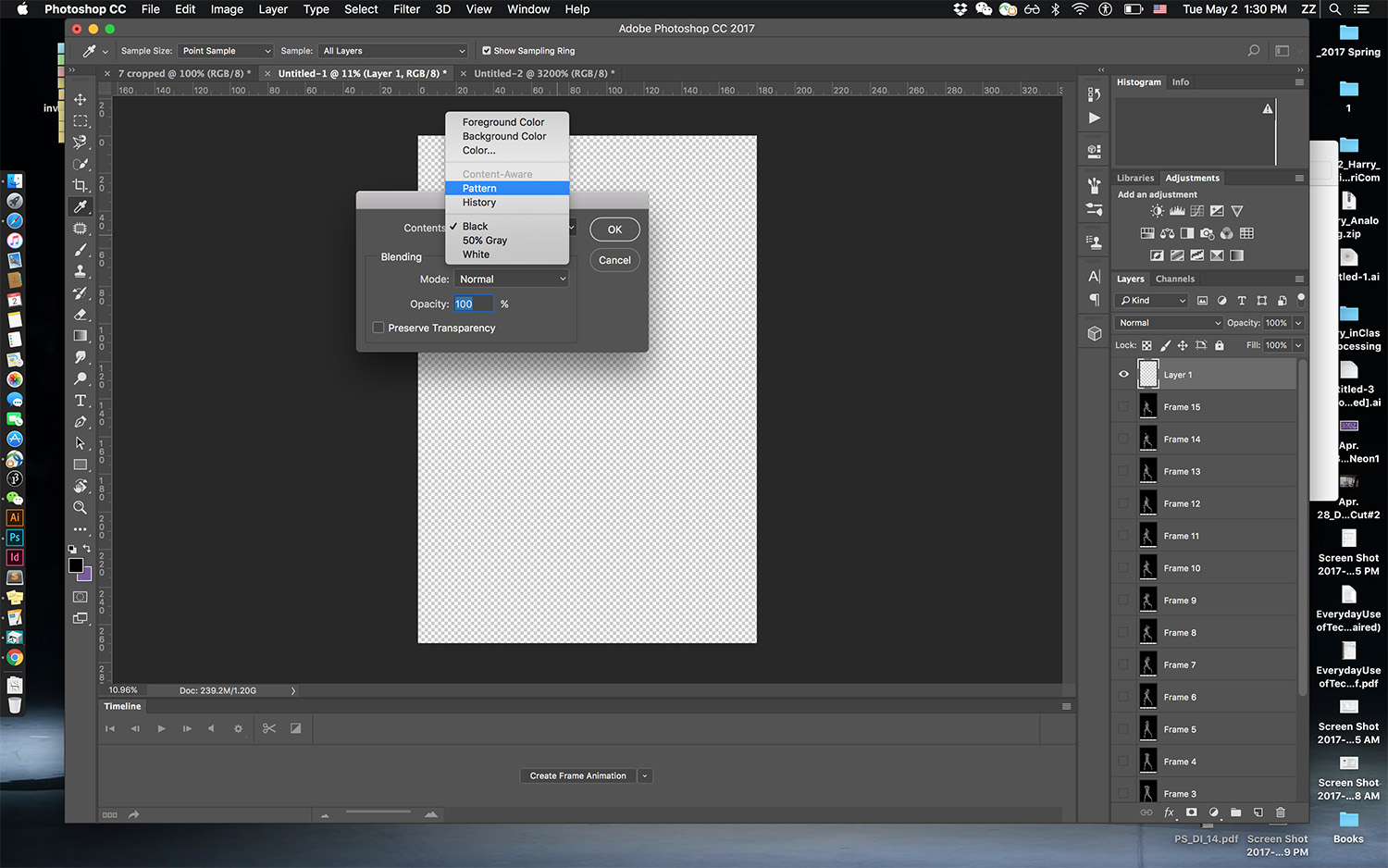 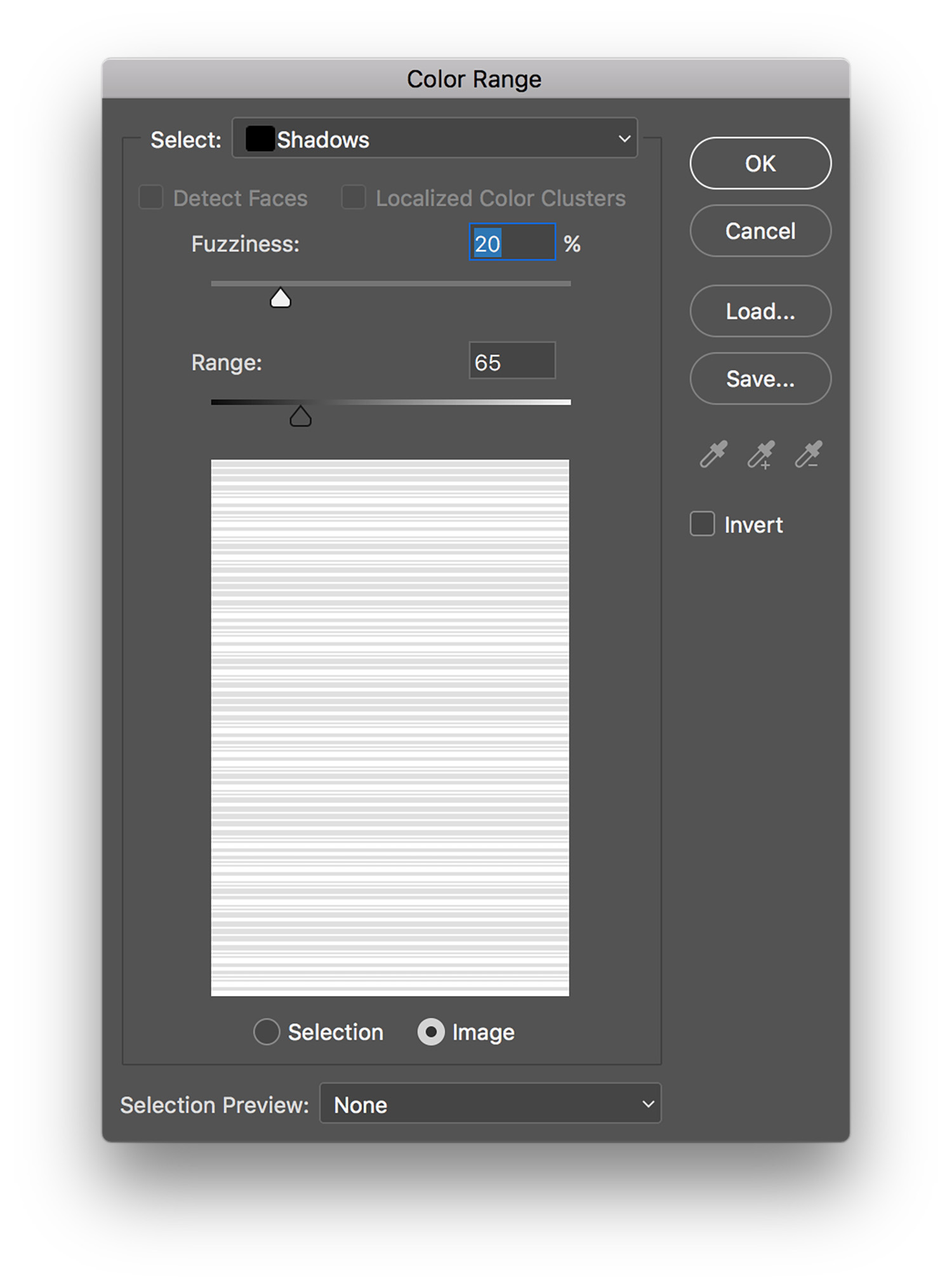 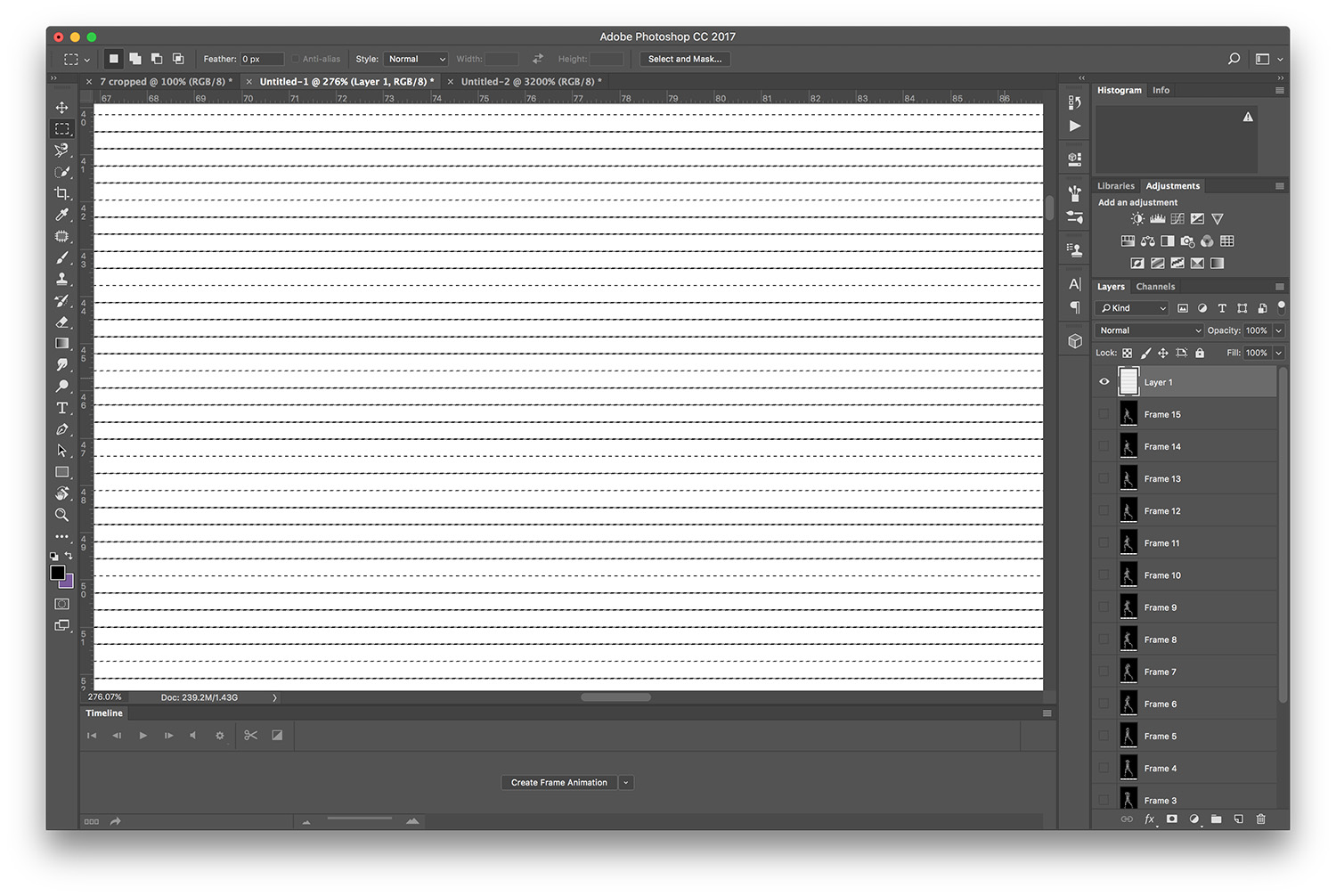 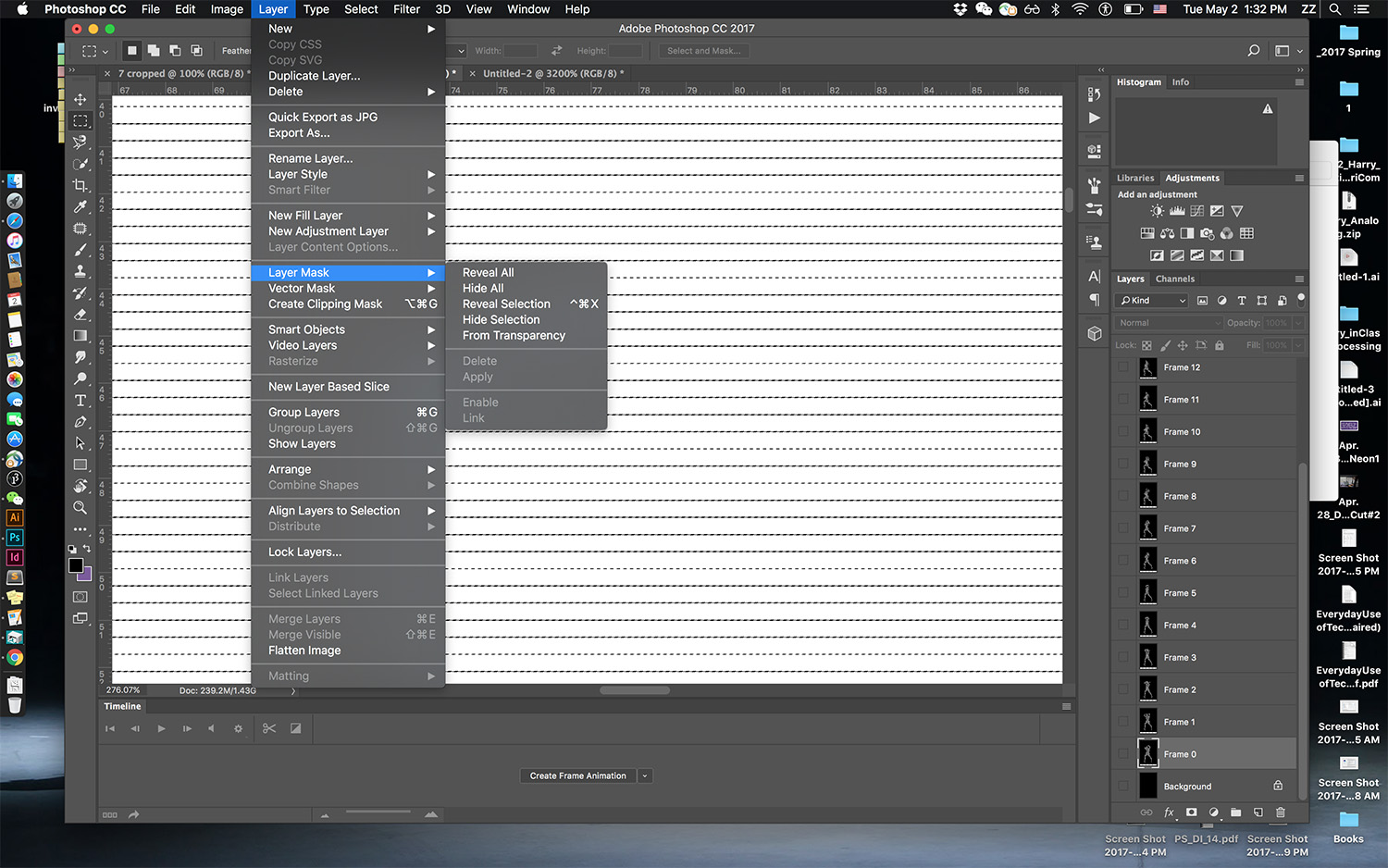